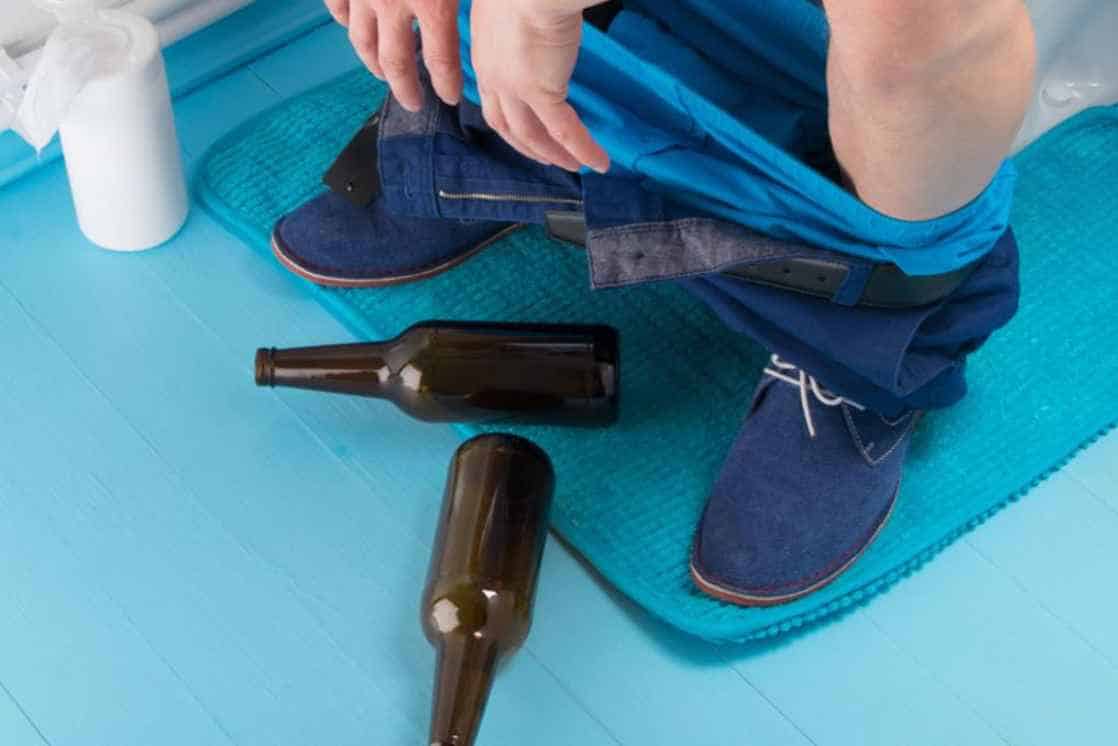 One of the scenarios we often witness at parties or clubs is the long-standing line in the restroom. Inevitably, we cannot escape this reality. Well, there’s a scientific explanation behind that.

Believe it or not, one of the reasons behind the situation mentioned above is the intake of alcohol, which beers contain. Are you now wondering why does beer make you pee? If yes, let’s end that curiosity!

Why does beer make you pee? 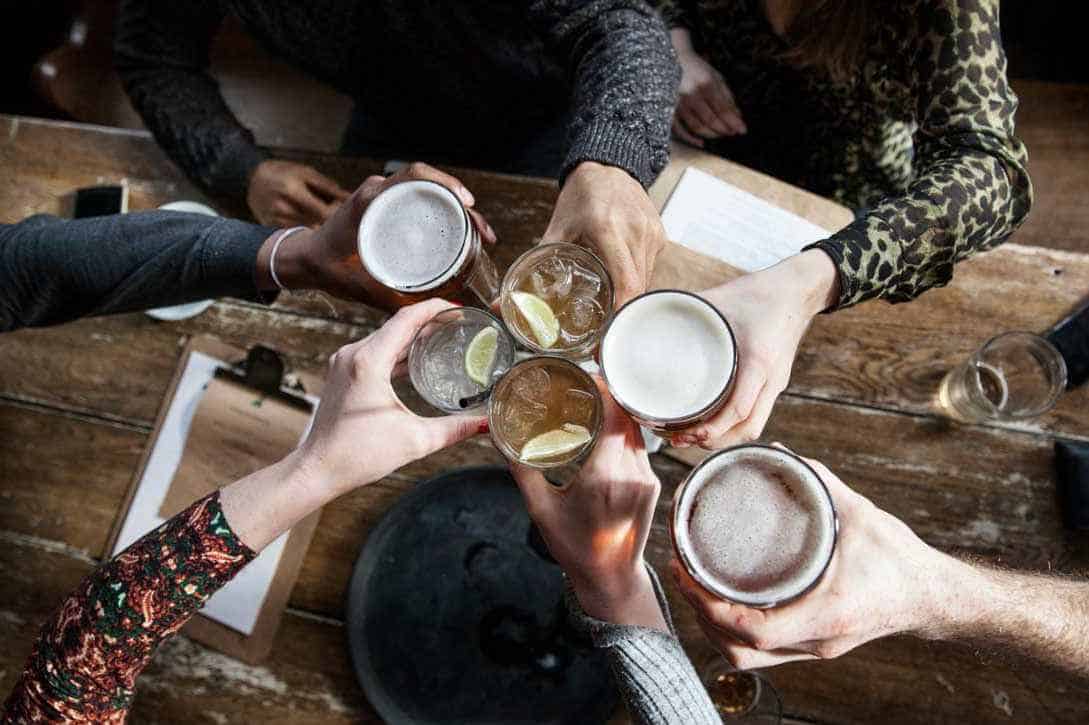 Beer makes you urinate because it contains alcohol and water. Although these two are the main reasons, people often neglect the latter. This should not be the case since this is the most apparent cause of beer making you pee.

First, let’s talk about the water content of beer. As we probably know, water is a necessary ingredient in making beer. Hence, it makes it understandable why it also contains much water after brewing.

Most beers contain 90 to 95 percent of water. In this case, It is just typical to urinate more than usual when drinking beer. Since bodies only have to maintain a certain amount of body fluid to function. Then the rest should be excreted.

On the other hand, ethanol or ethyl alcohol in beers is something people should look out for. If its amount in the body is not controlled, your system, specifically your endocrine system, gets messed up.

Here’s a simple explanation for that

Alcohol in beers is a natural diuretic. Also called water pills, diuretics are substances that aid the kidney in getting rid of excess water and salt in the body.

This happens when diuretics hinder the production of an antidiuretic hormone, also known as Vasopressin. If there is not enough of this hormone, the body will lose its fluid balance.

In simpler terms, without Vasopressin, all the water you intake will be sent straight to your bladder. Nothing will be left for your body to function.

Water and alcohol intake comes hand-in-hand when you drink beer. But again, these are also the causes of why people urinate so much when drinking beer.

We hope you understand why beer makes you pee. Now, let’s talk about how much beer can make you urinate.

How much beer can make me pee? 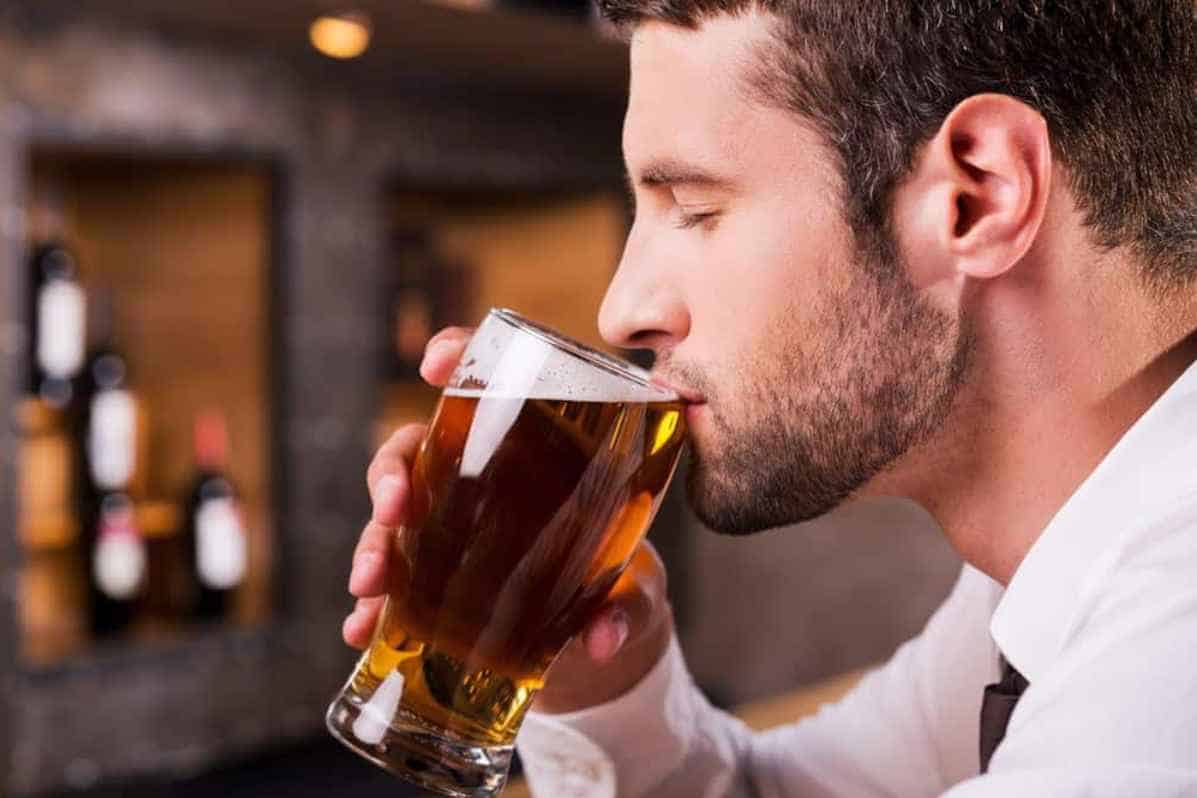 Typically, a standard amount of beer is already enough to make you pee. So, what is this amount?

Using the United States preference, it is safe to say that a 12-ounce beer is the standard drink. These are commonly canned or bottled beers with 5 percent alcohol content. You will probably get almost a full cup of pee when you drink the whole can or bottle.

A person urinates 6 to 8 times per day as the standard. In this sense, if you drink another 2 cans of beer, you can expect another 1-2 trips to the bathroom. The logic is simple: the more you take, the more you will release.

Although beer is already known as a diuretic and drinking it assures more urination, its effects still vary. The level of alcohol that the beer has and the body reactions are where we will focus.

Alcohol level of the beer 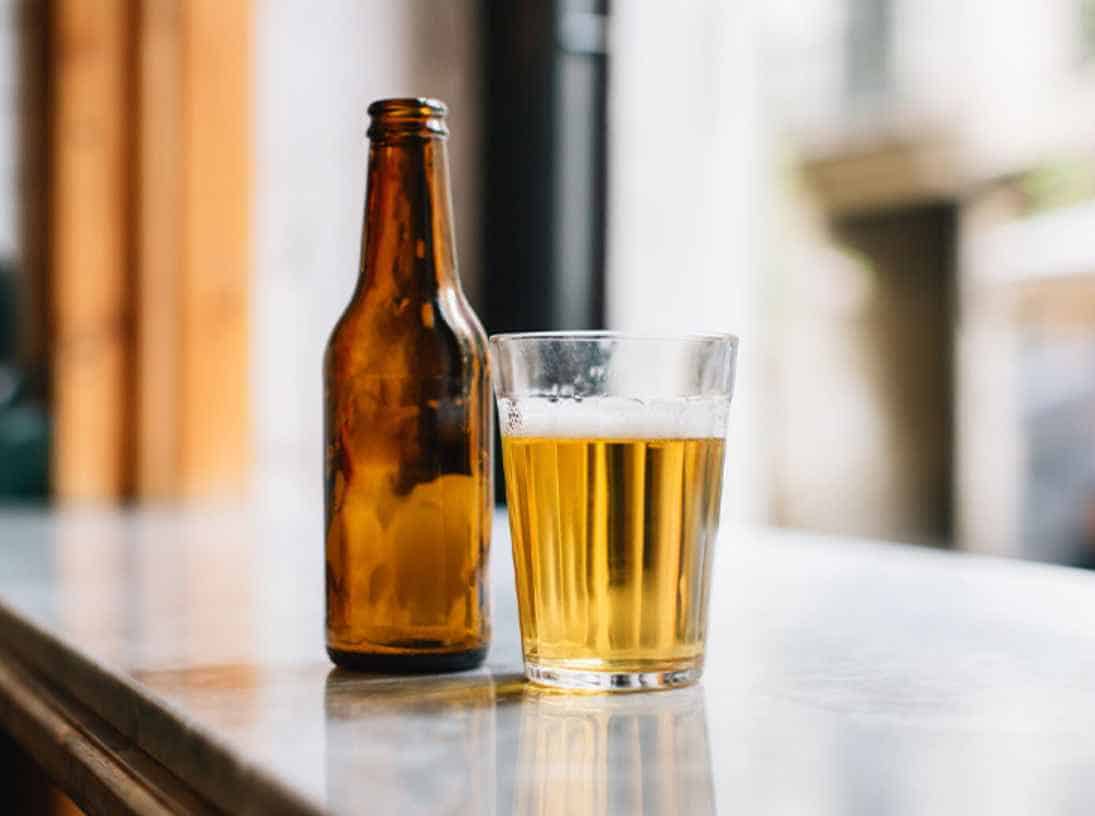 The alcohol content of beers, like in other beverages, is not the same. Some beers are more alcoholic, and some are not. Now, the question is, which of these affects urination most?

Before we answer the question above, know first that the alcohol by volume of beer ranges from 3 to 9 percent. Regular beers have 5 percent, while light beers only have 4.2 percent.

So, here’s the answer to the question: beers with higher alcohol content affect your urination the most. These beers can ultimately alter the hormone production of your body.

Which leads to the increased frequency of your going to the bathroom. Even though light beers have these effects, they are not as intense. 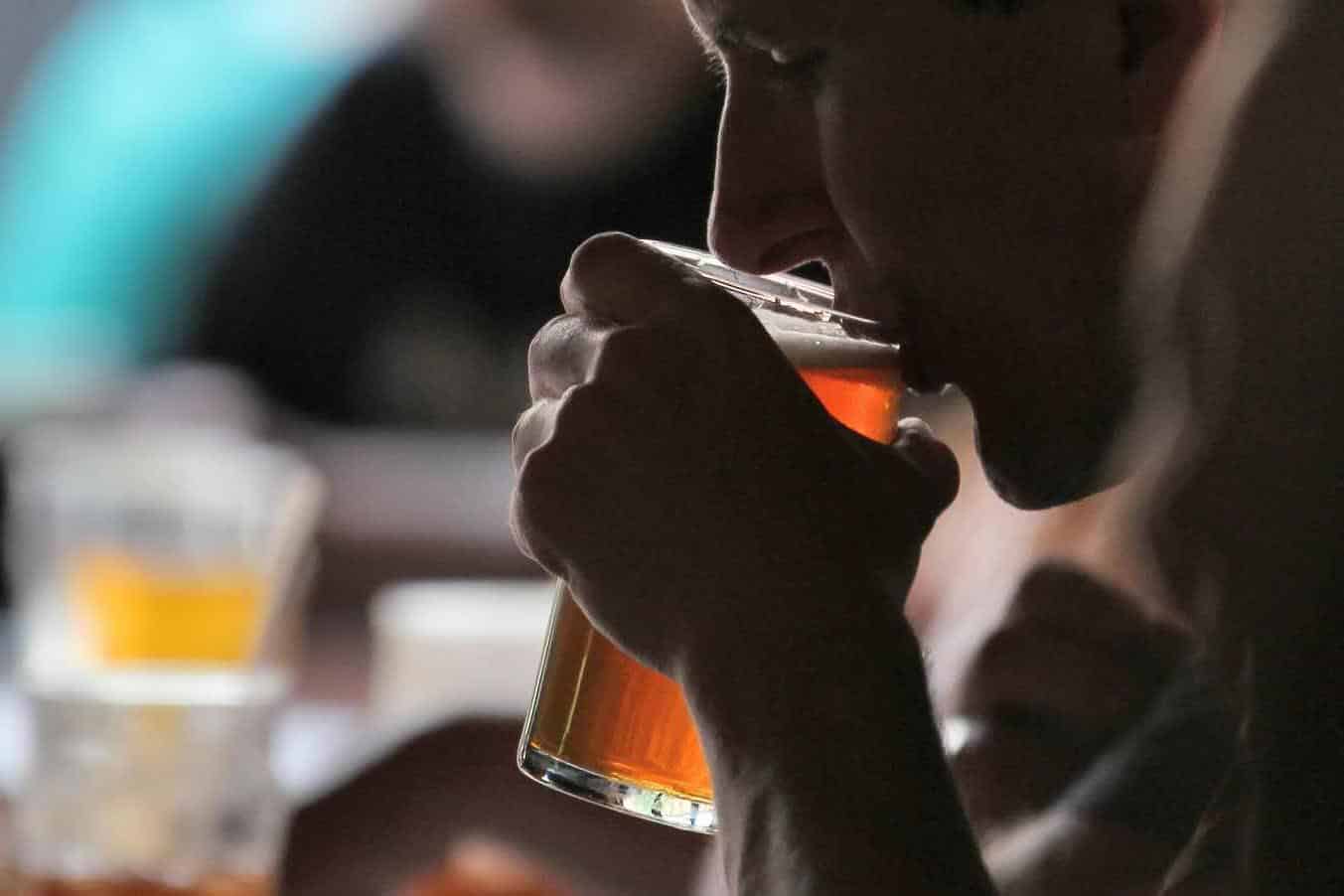 Little did we know, but our bodies can also change the effects of beer. Most of the time, it is because of how frequently we drink, but sometimes, it is also because of our health.

If you are a frequent drinker and are used to drinking highly alcoholic beers, you might experience less urination. It is because your body is already used to the effects of alcohol.

Meanwhile, the effect would differ if you are new to drinking. You might feel like you want to pee from time to time.

Individuals who have urinary retention might experience different reactions as well. In this case, it is crucial to be aware if you have the symptoms of this condition to avoid further complications.

Can I avoid peeing when drinking beer?

If you ask yourself if you can avoid peeing when drinking beer, the answer is no! Even if you drink non-alcoholic beers, you would still pee since it is mainly made of water.

Urinating is a natural body reaction. You cannot control it no matter what you do. It is a typical thing even if you are not drinking beer.

So, we advise that you stop holding your pee if you are doing that. It has no use after all. Trying to control your pee would also lead to difficult and unpleasant situations.

You may be aware of this, but let us remind you again. Holding your pee might cause Urinary Tract Infections or UTIs. You could also relieve yourself in situations that you must not. For example, when you are sleeping.

Again, there’s no such thing as stopping your pee when drinking beer.

The theory of breaking the seal

In connection to holding your pee when drinking beer, let us now talk about the theory of breaking the seal. Is it real?

If you are someone who believes that this is real, you should keep on reading!

We used the word ‘theory’ for a purpose. Breaking the seal is an urban legend that, until now, remains one. Here are two scientific arguments that might help you break your belief in this urban myth.

1. The beer is the cause of the frequent need to go to the toilet

The first part of this post explains why drinking beer makes you pee. Water and alcohol are the main reasons. Hence, the idea of urinating more after you “break the seal” is not scientific.

Experts believe that this theory is based more on mentality than scientifically. It became a notion for most people that even during gatherings, they become more focused on this.

One example is that they count how many times they have gone to the toilet during gatherings.

2. There is no seal in the bladder

If you are familiar with the body’s anatomy, you’ll understand there is no seal in the bladder.

This is one of the apparent reasons why breaking the seal is just an urban legend. Yet unfortunately, most people still neglect it.

Remember that there is nothing wrong if you believe in breaking the seal. However, it could lead to severe complications like UTI if you choose to hold your pee just because of this myth. It is still best to prioritize your health.

Watch this video about the theory of breaking the seal:

The clear urine when drinking beer

Now, you may be wondering why your pee becomes clear after going back and forth to the restroom. Well, this is something you should not worry about.

Having colorless and transparent urine is normal, especially when you have already consumed alcohol. The clear urine is just water.

Although this is common, you should still be wary as it often leads to dehydration. Consider clear and colorless urine as a warning sign that your body is already running out of water.

When this situation happens, the best thing to do is pause or stop drinking alcohol. Drink plenty of water and give your body time to recover.

The connection between beer consumption and hangover

Hangovers are one of the common after-effects of drinking beer. People who are actively engaged in drinking know this fact.

However, a hangover is not caused by the beer itself. It is due to the alcohol in the beer or any alcoholic beverage. Alcohol can cause various effects on the body, which leads to hangovers. Some of these effects are listed below:

These are only a few effects of alcohol on the body that result in hangovers. Some may also feel sleepy but in a disrupted manner. This may result in getting tired and headaches.

We like to remind you that effects may still vary for everyone, as well as their severity. Some are sensitive to alcohol, while others can handle heavy alcoholic drinks.

Now that you know why does beer makes you pee and how it is related to hangovers, it is easy to take some precautions for your next beer-drinking session.

Beer, indeed, could cause serious health effects on the body. However, if you really like to consume it, do it mindfully!