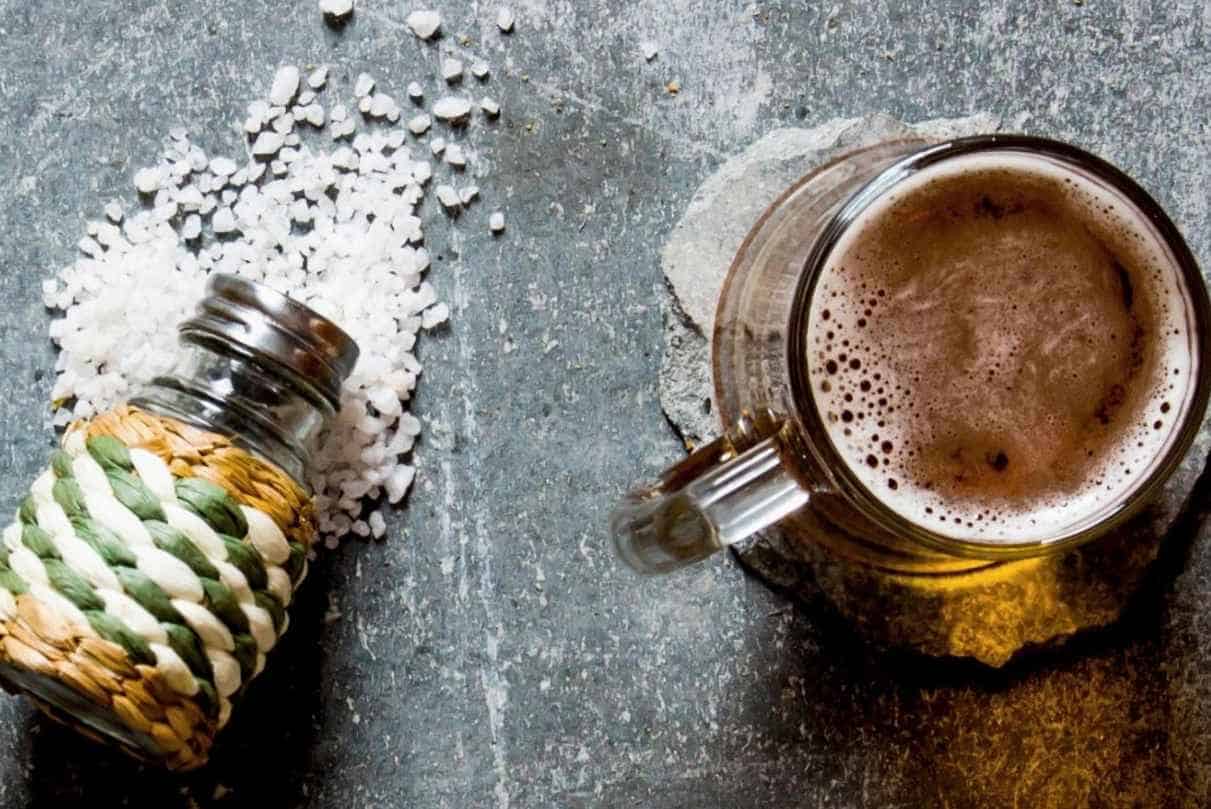 One of the most interesting questions I asked myself lately was ” Why do people put salt in beer?”.  You should have seen the look on my face when I found out. Since I am a curious cat, I figured we have to know why this even happens!

Salt In Beer: What’s Up With That?

Color me surprised when I was told that people add salt to their beer. I know people do that with tequila, but it was my first time hearing about beer and salt. Apparently it has something to do with the beer’s bitterness.

Adding salt to the mix reduces the bitter flavor of the beer. Salt happens to be a really good enhancer that suppresses bitterness and lets other flavors shine. Now, this sounds like something you should try when the beer you are drinking is too bitter for your liking.

Where Did The Practice Of Putting Salt In Beer Start?

The whole “salt in beer” practice might be new to me, but it’s been around for ages. Putting salt in beer is even part of some countries’ drinking practices and traditions. When did this even begin? Well, there might be a couple of origin stories going around.

The Mexicans are famous for adding salt to their beers. They would usually pair it with a slice of lime. While they might be the first ones to come to mind when thinking of beer and salt, the credit for the inception of this would probably have to go to the Germans.

We all know that Germany is famous for its beers, so it would not be surprising if this beer hack came from them. There’s a kind of German beer made with salt that’s been around for over a thousand years.

It’s also worth mentioning that while the Mexicans fermented alcohol, it was the Spanish followed by the Germans who brought their European-style brewing practice to the country hundreds of years ago.

Regardless of who started this, it totally became a game changer. People can now enjoy beers they would normally find too bitter for their taste. It’s something people from around the world do whenever they want to tame the bitterness of their beers.

Since we are on the subject of salt and beer, is there a particular kind we should be using? There are various kinds of salt out there but you don’t need the ones with fancy names.

All you need is some coarse salt, and you are good to go. However, if you want that extra kick, you can add some flavorings such as hints of lime or citrus into the salt. There are even beer salts mixed with other flavors like spices and fruits. Beer salts like these are pretty common in Latin America.

While you can just go to your kitchen and use whatever kitchen salt you have there for your beer, you might also be interested in buying beer salts. There are some companies selling beer salts commercially. They just add more fun and excitement to your beer drinking experience.

Beer salts sometimes come in small, handy containers, so you can take them wherever you go. You can go to your favorite bar, order some beers, open your portable salt beer, and put it in the bottle. You can even use them for other alcoholic beverages.

Do Breweries Add Salt In Their Beers?

If you think putting salt in beer only happens when you are about to drink, that’s where you are wrong. There are a lot of beers out with salt as one of their ingredients, especially the artisan ones. You might be surprised that some of your favorite beers contain salt.

The addition of salt to the beer usually occurs in the brewing process. There are various reasons why brewers would opt to add salt to their brew. It could be their way of balancing flavors, especially if they put way too many hops in the early stages of brewing.

If this happens, the brew might become too bitter, so they have to do something to stabilize the flavor. They can turn to a natural flavor enhancer like salt to rectify the situation.

Perhaps one of the most popular beers that contain salt is the Gose Beer from Germany. We spoke earlier about a German beer that’s been around for ages.

Germans have been brewing this beer for quite a long time. And it’s no surprise that breweries worldwide have caught on and started brewing their Gose-style beer.

One of the most distinctive features of this crisp, carbonated beer is its saltiness. The original Gose beer had that salty flavoring because of the water from the Gose River. When brewers from other places in Germany wanted to brew this style of beer, they had to figure out how to replicate it.

Brewers found out that adding salt and coriander during the brewing phase was the next best thing. This was actually against the German Beer Purity Law. However, it did not stop people from brewing this kind of beer.

If ever you find yourself in Germany in the future, try ordering a Gose beer. However, if that’s not feasible anytime soon, you can always consider buying these Gose-style beers:

How Do You Add Salt To Your Beer?

If you are going to try putting salt in your beer, you might as well do it the right way! It doesn’t matter whether you want to get rid of that bitterness or boost the different flavors of a beer. If you haven’t done this before, you might make some mistakes in the beginning.

When Life Gives You Limes

If you want to put some salt in either a beer bottle, can, or glass, you might need a little help from a lime. You might have seen some people do this with a Mexican beer. Do note that not all beers need salt for flavoring and taste purposes.

Start by taking one lime wedge, squeeze some of its juice into the beer, and then rub the rest on the mouth of the beer bottle or glass. Lime is also not a requirement, albeit it adds flavor too.

Once you are done with using the lime wedge, you can either chuck it away or add it to the beer. It depends on what you want to do. You might have seen some bartenders and waiters stuff the lime inside the beer bottle.

Salt would stick much easier and better since the surface of the beer bottle, glass, or can is wet from the lime juice. As mentioned, if you don’t have the lime, it’s no problem at all. Make sure you sprinkle just the right amount of salt.

If you are putting salt in the beer, avoid putting too much. Salt triggers the beer to start fizzing and foaming. If this happens, beer will start spilling all over the place.

You don’t want to look like a mad scientist with a bad chemistry experiment and waste perfectly good beer. Once done with adding salt, enjoy the beer and its more elevated flavors.

What Are The Pros Of Adding Salt In Beer?

Flavor improvement is often the focus when it comes to this subject. However, there is more to salt in beer than meets the eye. There are actually some benefits that you should know about!

You can’t help but notice how much it makes you feel bloated and gassy when you drink beer. If you want to reduce these uncomfortable feelings brought by alcohol bloating, perhaps adding salt to your beer might do the trick.

When the beer and salt interact, the former starts bubbling, forming foams on top. This signals the release of gas from the beer. If you drink beer that has less gas content, you won’t feel as swollen as you usually get.

We hate to admit it but drinking too much beer causes a hangover. If you want to get rid of a beer-induced hangover, here’s something you can try to do the day after your drinking spree. If you can find the same beer you had, the better.

All you have to do is add salt to the said beer, drink it, and wait for the hangover to go away. While some naysayers say this doesn’t help, there’s no harm in trying. However, don’t forget to rehydrate yourself with water.

Learning about why people put salt in beer has been exciting and fascinating. It’s one of those things you think you shouldn’t know about but you just have to. The knowledge you get from this would totally be helpful when you are out and about and drinking some beers with your friends!