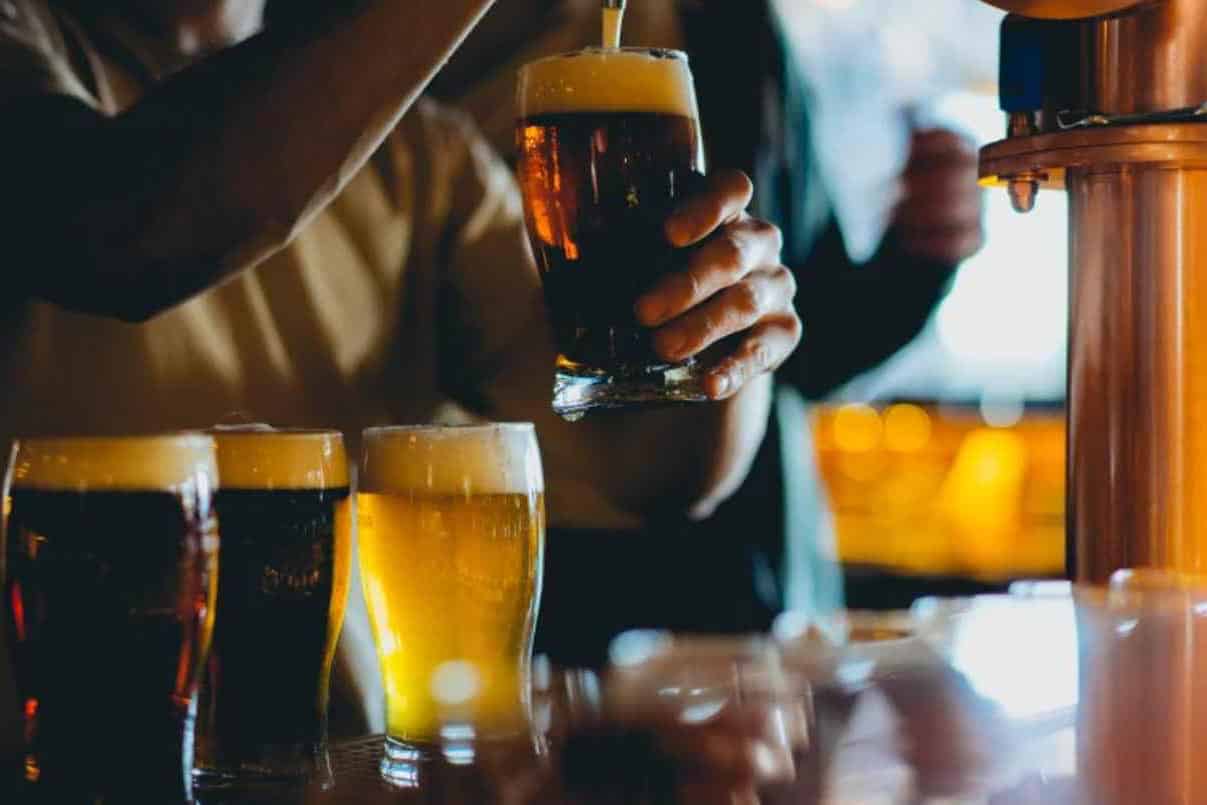 Drinking ice-cold beer sounds like a delightful treat. But you might miss out on the beer’s incredible features if it’s too cold. A lukewarm beer isn’t much fun to drink, either. It may not be as thirst-quenching as it should be. So, what temperature should beer be served at? Read on to know more.

Why Does the Ideal Beer Temperature Matter?

Sometimes, we tend to drink beer without regarding its temperature. The experience can be better if we consider its ideal coldness. The beer’s temperature can significantly impact its taste.

A beer’s flavors flourish at the right temperature, especially for artisanal brews. Some beers lose their aroma if they’re served too cold. The right temperature allows drinkers to taste the beer’s nuances and ingredients. It might entail some effort, but it will be worth it.

What happens when beer is served too cold?

It might be tempting to drink beer ice cold in hot weather. However, it might not bring out the beer’s unique features. The coldness may mask the brew’s flavor. It can also amplify its dryness, carbonation, and bitterness. The texture and taste will be unpleasant when this happens.

An overchilled beer may turn hazier than usual. Additionally, it can cover up its aroma. The aromatic compounds get “frozen” when beer is chilled for too long. This process slows down evaporation so the scent can’t escape.

What happens when beer is served too warm?

Warm beer may bring out more aromas and flavors. It may seem a good thing initially, but it can get overpowering. The carbonation and bitterness may also lessen as it reaches room temperature. These occurrences will lead to a flat-tasting or tasteless beer.

Drinking a warm brew can be an unpleasant experience. Serving it at a high temperature strips its delicate flavors. It does not give the drink a chance to shine.

A beer director shares the reasons why beer serving temperature is essential.

So, what is the right temperature for serving beer? Surprisingly, not all beers need to be cold. Like wine, each beer has a corresponding ideal serving temperature. The rules are not permanent. It still depends on the drinker’s preference. But some general rules can help you enjoy your beer to the fullest.

Commercially produced light lagers flourish in cold temperatures. The taste of traditional American brews improves when they’re cold. These beers usually have low alcohol content. Even if they get warm, the flavors won’t come out anymore.

Here are some of the beers that taste best when served at 34-45°F:

There is only one universal rule for American light lagers. It would help if you served it cold. A temperature of 34-40°F is an acceptable range. Meanwhile, light lagers are at their most delicious at 36 to 38°F. It is the usual temperature setting for draft beer systems.

Brewers designed lagers to be refreshing and crisp. They also have little malt or hop flavors. So, a lower serving temperature will maintain that light and clean mouthfeel. Most bars dispense lagers in kegs at temperatures between 41 to 45°F. Many Lager lovers would agree that 38 degrees Fahrenheit is the sweet spot.

Pilsners have a natural malty sweetness. You can also sense some medium to high bitterness due to its hop content. These features shine best at lower temperatures. If you’re aiming for maximum enjoyment, drink Pilsners when it has reached 40°F

Blond Ale is synonymous with summer. It’s a refreshing and light-bodied beer style with a smooth mouthfeel. It is also low in alcohol, warmth, and bitterness levels. You can best enjoy them at 40 to 45°F. This temperature level brings out the flavors of spices, fruits, and honey.

This beer style exudes citrus, fruity, and hoppy flavors. It also places low on the bitterness scale. Its caramel character comes out at 45°F. Going beyond 50°F may diminish its delicious notes.

Typical examples of wheat beer are Hefeweizen, Belgian style, and American wheat ale. They exhibit their best flavors at 40 to 45°F. Wheat brews that show cloves and banana aromas can be served slightly warmer than recommended.

Most IPAs, Porters, Stouts, and American Pale Ales flourish at a cool temperature. It ranges from 45-50°F. This range may be slightly warmer than the first batch mentioned. However, it still is cool to the touch. Serving these beers at a lower temperature may lessen their flavor potential.

The following are the beer types that are best served at 45-50°F:

Oktoberfest and Amber lagers feature a clean hop bitterness and malty richness. They’re more delicious when they’re slightly warm. This ideal condition brings out biscuits, toasted bread, and caramel-tasting notes. You can best enjoy their richness if you serve them at 45-50°F.

The India Pale Ale category includes beers with varying styles and flavors. All of them are best served at around 38°F. This condition enhances the beer’s piney and citrusy flavors. On the other hand, an American IPA’s ideal temperature is about 45-50°F. The exact temperature will still depend on the beer’s bitterness and alcohol levels.

A temperature range of 45-50 °F suits Stouts and Porters. These roast-flavored and rich beers bring out their best flavors when they’re not too cold. Nitro Stouts can showcase their grassy texture at 45°F. An All-American stout’s chocolate, caramel, and coffee notes emerge at 50°F.

Imperial Stouts exude their essence when they’re slightly warm. Serving them cold can dim all their exotic flavors.

A fruity and hoppy sour beer flourishes at 45°F or slightly warmer. On the other hand, the ideal temperature for funky and refreshing sours is 42-45°F. The Belgian Lambic beer is safe to serve between 40-50°F. The acidity gets a boost as it reaches its maximum temperature.

The double and triple Belgian beers are known for their highly malt-forward features. Their chocolatey notes tickle the palate. Additionally, its banana-like esters and sweet, fruity flavors shine at 48-50°F.

Generally, solid and rich beers are best enjoyed at warmer temperatures. Most Belgian ales shine at 55-60°F. On the other hand, you can enjoy boozier brews such as double IPAs at 55-60°F.

Brewers of these full-bodied beers use various yeast types. The choice of ingredients contributes to the beer’s robust flavors. You can best appreciate their nuances at 50-55°F.

Double IPAs, Imperial Stouts, and barley wine are solid and rich ales. These warming beers express rich and robust flavors. These features flourish at a “cellar temperature” of 55-60°F. This temperature is also best for English old-style ales. Their malty, sweet, and bitter characteristics come out when it’s warm.

Here’s an overview of recommended temperatures of all beer types. This list can help you maximize each beer’s flavors and aromas. While they are not set in stone, it helps to have some knowledge. Suppose a bar served overchilled beers. You can let them sit until it reaches the right temperature.

Aside from temperature, there are other things to consider when serving beer. The following factors can help you maximize the beer’s incredible qualities.

Do you know why commercial lagers are served ice-cold? It is because the coldness enhances its signature fizzy sensation. The beer’s lack of robust flavors becomes apparent when it trunks flat.

Beers tend to get warm fast when they’re poured.

A beer’s temperatures will only stay ideal for a short time. So, enjoy them before they get too warm for pleasure. It’s best to be mindful of your drinking pace, especially when the weather is hot.

Pour easy-drinking beers in German-style glasses or mass. They are best when cold and served in big mugs. A pint glass will be perfect if you drink your beer slowly. It will take time before the drink gets too warm.

Check out this video to learn more about how to serve beer.

So, what temperature should beer be served at? The simple answer is it depends. The beer style will dictate the ideal serving temperature. Drinking and serving beer at the right temperature brings out its delectable flavors and aromas.