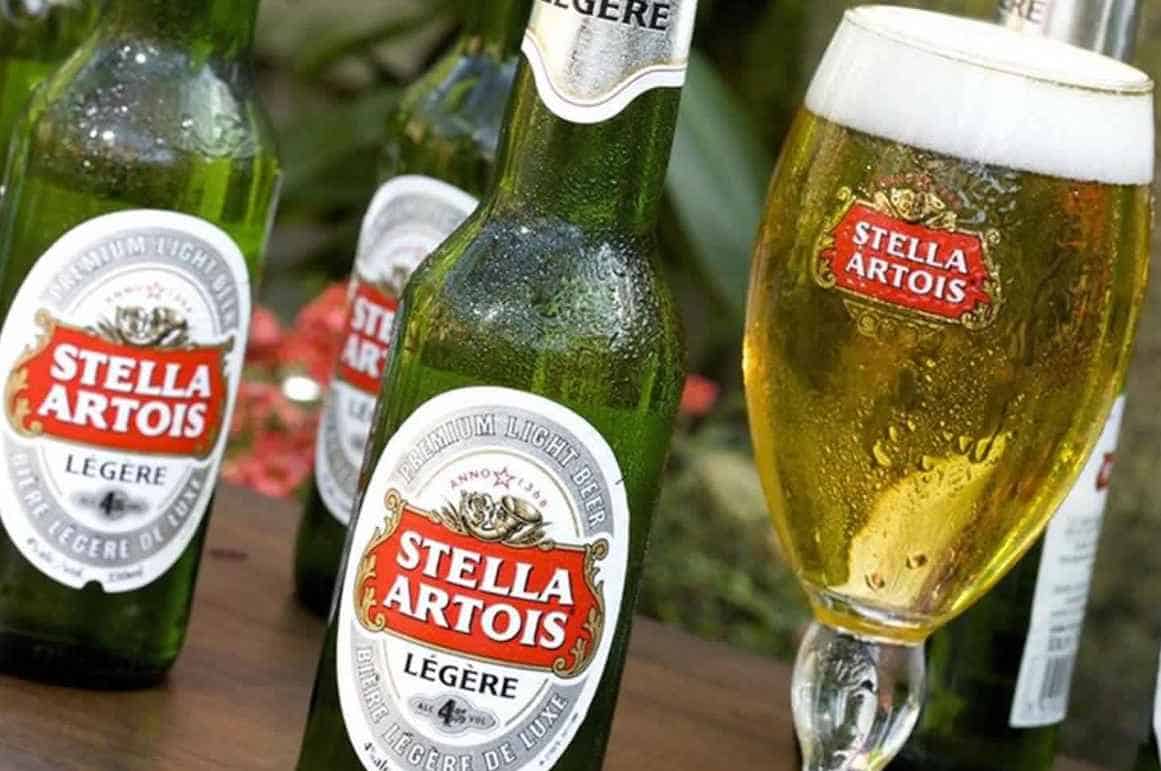 Stella beer, or what the world knows as Stella Artois, is a Belgian pale lager. It has been tagged as the best lager in Belgium, and its rich background will certainly back up this claim.

So, what is Stella beer? What does it taste like, and why is it controversial in today’s beer scene? Let’s find out through this complete guide about Stella Artois beer. 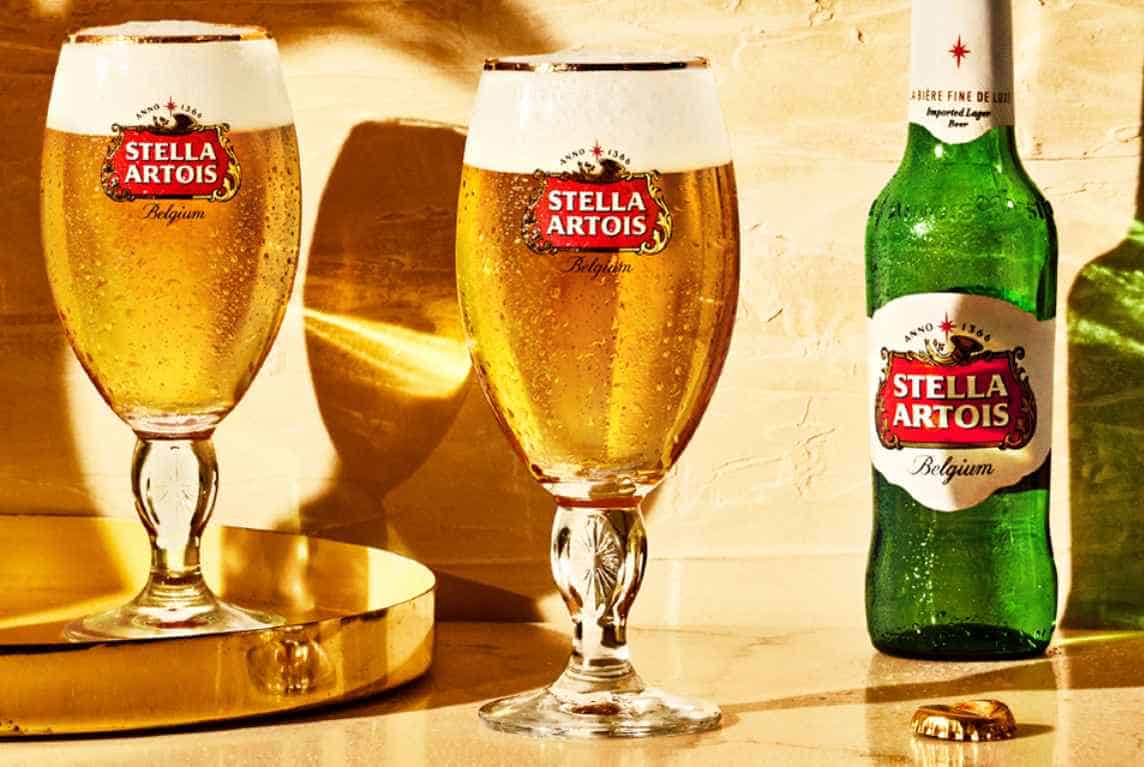 Stella Artois beer has a golden color, and it produces a frothy head that is about an inch tall that lasts for about a minute before disappearing. It also has tiny bubbles that you can see when poured into a clear glass, showing it has great carbonation and fizziness.

This beer has a light-to-medium body and delicate carbonation, providing a delightful mouthfeel.

The nose hints at what the palate will be like, and it lives up to those expectations. It has flavors reminiscent of grass combine with those of sweet grain to produce an overall taste and texture that is simple and uncomplicated.

The aftertaste is characterized by a persistent sweetness that lingers between sips and a crisp bite that punctuates the entire flavor. And because of the hops, it has a mild herb-like aftertaste that lingers for a long time.

Because of its image as a drinkable, refreshing, and crisp beer, Stella Artois is perhaps one of the beers known the most globally.

However, one could argue that the beer’s flavor profile is not ambitious enough, resulting in a lager lacking in impact and simple to forget. Those who are hoping their brew will provide them with an exhilarating experience will likely be let down.

Do not compare it to a freshly brewed beer from a local brewery because it greatly differs in flavor and ingredients because breweries with taprooms tend to experiment with their beers, thus producing limited, creative, and flavorful brews. And Stella Artois is unlike those. 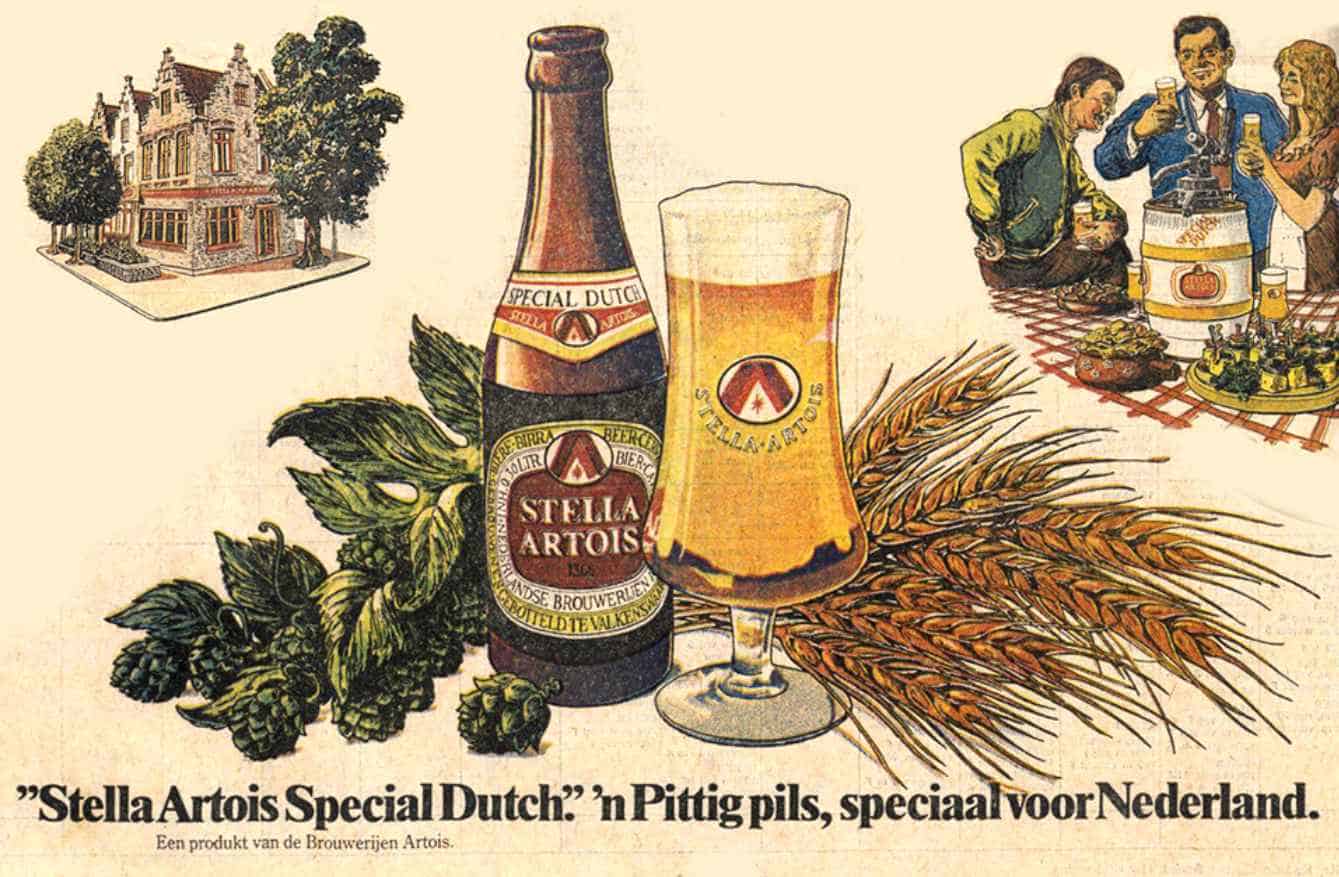 Stella beer has a rich history dating back to 1366 when the Den Hoorn Brewery was established. Den Hoorn, the brewery’s owner and headmaster, crafted the classic flavor and style of Stella beer and introduced it to the people of Leuven, Belgium.

The beer got its name Stella which means “star” in Latin, because it was originally a Christmas brew. But unexpectedly, the people loved it, and it became popular. Thus it was brewed all year round and gained tremendous consumers.

The Den Hoorn Brewery then became a well-known brewery and has survived decades in the industry. But in 1708, it had a big change when Sebastien Artois took over and served as the head brewmaster for nine years.

And in 1717, he officially purchased the brewery, making him the owner, and he changed the name to Brouwerij Artois or what we now know as Stella Artois Brewery.

Sebastien Artois took good care of the brewery and made the Stella Artois beer even more popular through effective marketing, advertising, and branding. The beer has finally been distributed all around the globe, surpassing the sales and popularity of the original Den Hoorn Brewery. 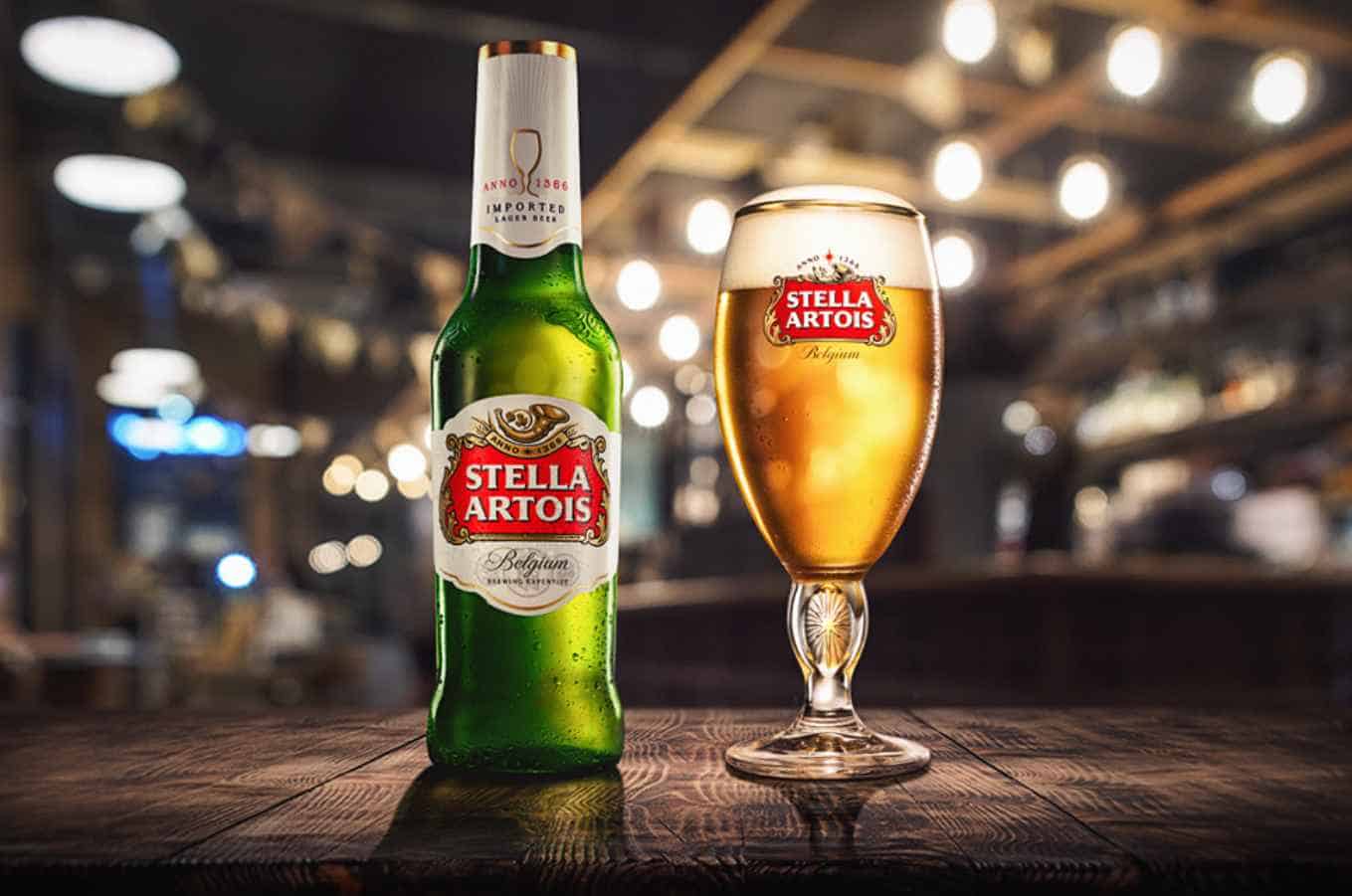 Because of the success of Stella Artois, it landed in the top 7 of the most popular beer to consumers in 2022, surpassing Bud Light and Budweiser.

It also secured a spot as one of the best beers of all time in Europe and worldwide. But before being this big, Stella Artois had to go through numerous things and didn’t stay as an independent brewery because, in 1988, it merged with Piedboeuf Brewery.

Due to the shared passion and dream of being the largest beer producer and brewing company, Stella Artois and Piedboeuf have merged the two brands, calling it Interbrew.

The merging also included the acquisition of Labatt, a notable Canada-based brand. This gave Interbrew the identity of being a multinational beer company. However, its move didn’t stop there.

In 2004, Interbrew made a bold move and merged with the Brazillian brewing company, Ambev, and in 2008, the foundation bought Anheuser-Busch. Today, this multinational brewery is known as the world’s largest beer producer and company and goes by the name Anheuser-Busch InBev. 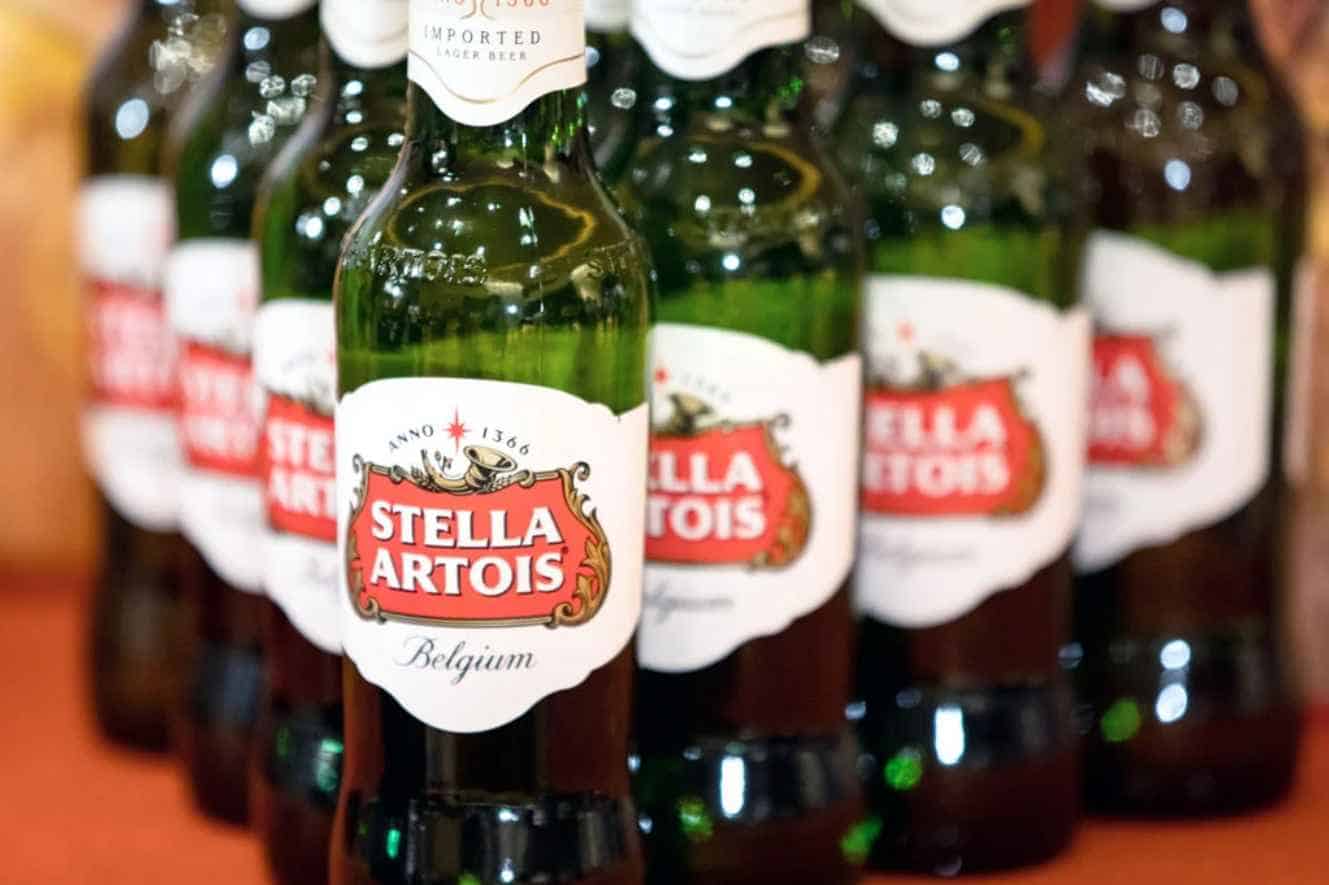 Stella Artois is advertised as a high-end beer brand on the global market to appeal to consumers. This strategy was fruitful in many respects since, in today’s culture, the well-known lager is regarded as a representation of luxury and finesse.

Stella Artois did a great job at marketing its beers, as it earned multiple recognitions from all around the world.

Through its commercials during the Superbowl broadcast with famous celebrities handling the advertising campaign, Stella Artois really made its image one-of-a-kind and a true luxury brand.

Stella Artois even made the popular “9-Step Pouring Ritual,” showcasing the proper way to pour the Stella beer so consumers can enjoy it at its best. The steps included were:

This ritual basically shows what glass to use, how you should pour the beer, the right amount of foam, and how it should be served. They gave the steps a majestic name for, obviously, marketing. 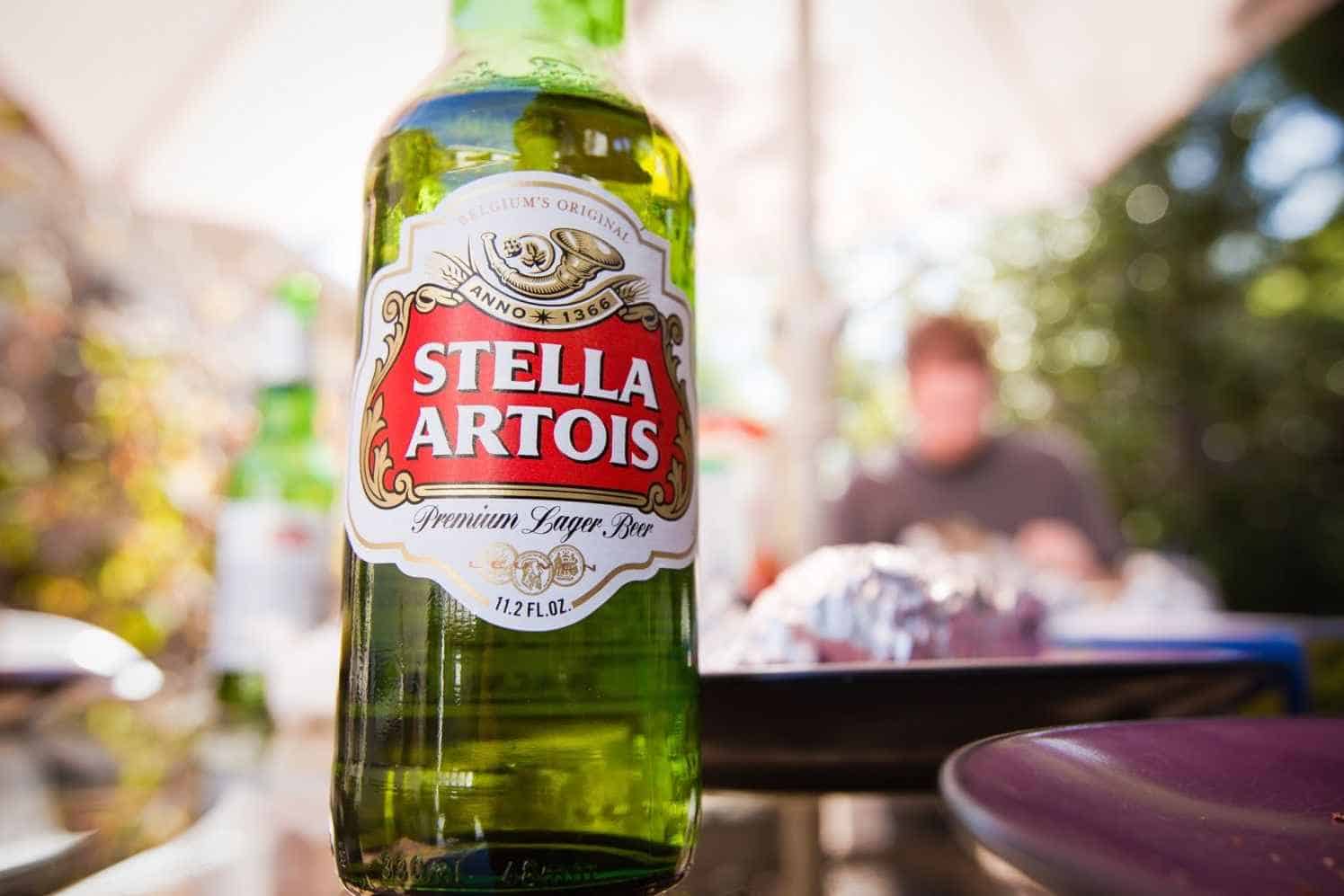 What sets Stella beer apart from its competitors is its bottle design. When you see it, you can immediately know that it is Stella beer because of its color, bottle, logo, and cap. It gives the beer uniqueness and builds its image as a sophisticated beverage.

If you check Stella Artois’ bottle, you will see a horn logo. This logo is a homage to the original founder and brewer of Stella Beer, Den Hoorn. He is the person who created the classic flavor and texture we all know when drinking a refreshing glass of Stella beer.

If you look closely at Stella Artois’ bottle, you’ll see Anno 1366 right on top of the horn logo. It is the date when the Den Hoorn Brewery, the brewery that birthed this beer, was established.

However, it’s deeper than that. 1366 is also the year when the city of Leuven officially entered the beer brewing scene because Den Hoorn is the very first brewpub to be founded in the city.

Due to the high demand of people, Stella Artois Brewery crafted other beer varieties aside from its world-famous Belgian pale lager. Check out below its five other varieties.

Although not as magnificent as the classic Stella beer, these varieties gained recognition and fans because of their rich flavors and well-balanced aromas.

Due to the popularity of Stella Artois beer, consumers tend to compare it with other famous beers and say what is better. However, the result totally depends on the person since we all have different tastes. Some say that Stella Artois is better, and some say the other.

Like Stella Artois, Heineken is a European lager and is distributed worldwide. These two are the most compared beers because they share a lot of attributes, from style to packaging. You might already know this, both Stella Artois and Heineken have green bottles and cans.

They even have the same white and red color for the logo. And they also have the same level of alcohol content and have zero-alcohol varieties as their alternatives. However, they differ in flavor and aroma.

Stella Artois comes with a herbaceous aroma and has a light, sweet aftertaste. While Heineken has a less pronounced aroma, and its flavor is richer compared to Stella Artois, and it also lingers on the palate longer.

Another controversial comparison in the world of beer is between Stella Artois and Budweiser. Both gained the attention of the people since its current brand holder, Anheuser-Busch InBev, had to choose which of the two should be its flagship beer.

So who won? Interestingly, Budweiser was chosen despite Stella Artois being the most popular of the two. This was because Budweiser won in terms of total sales in 2017 and has a better satisfaction rating than Stella Artois.

Taste-wise, Budweiser also surpasses Stella Artois when it comes to flavor since Budweiser is fruity, refreshing, and has a smooth finish. People prefer its pronounced flavor overthe subtle malt sweetness and hoppy bitterness of Stella Artois.

After reading this guide for “What is Stella beer,” we hope you learned everything you wanted about this beer. Therefore, go now to the nearest store and find yourself a bottle of Stella Artois and know why this Belgian beer gained worldwide recognition!