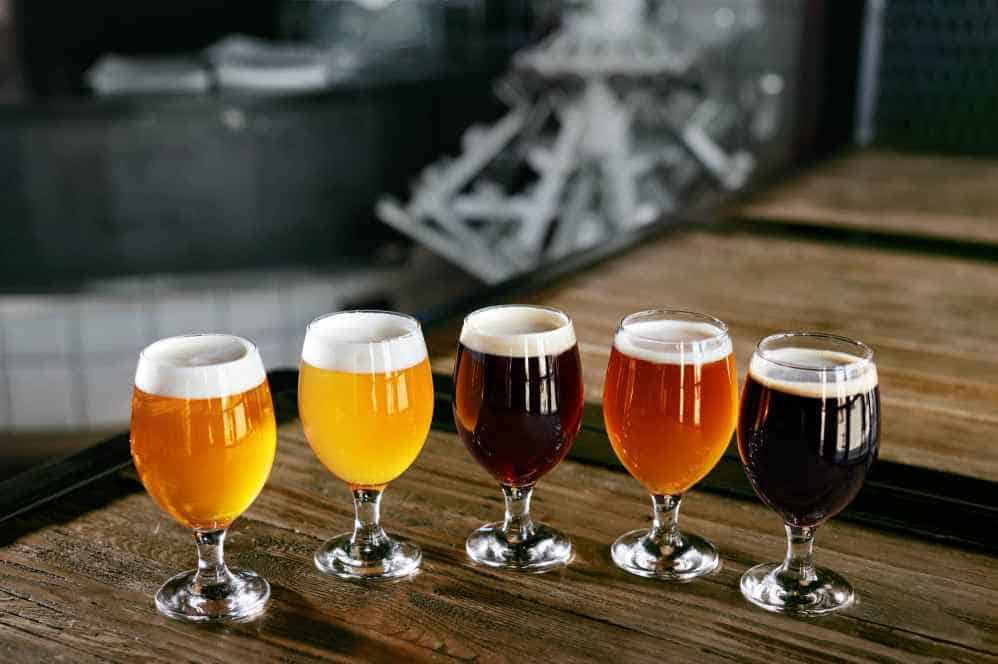 Beers come in all sorts of shapes and sizes. However, it does not end there. As you might already know, these alcoholic drinks also come in different shades and hues.

With that, these colors and tinges might have you wondering if there is more to them than meets the eye. Well, you do not need to wonder anymore! We will answer that and so much more in this beer color guide!

We hope you and your beer are ready. Let’s go! 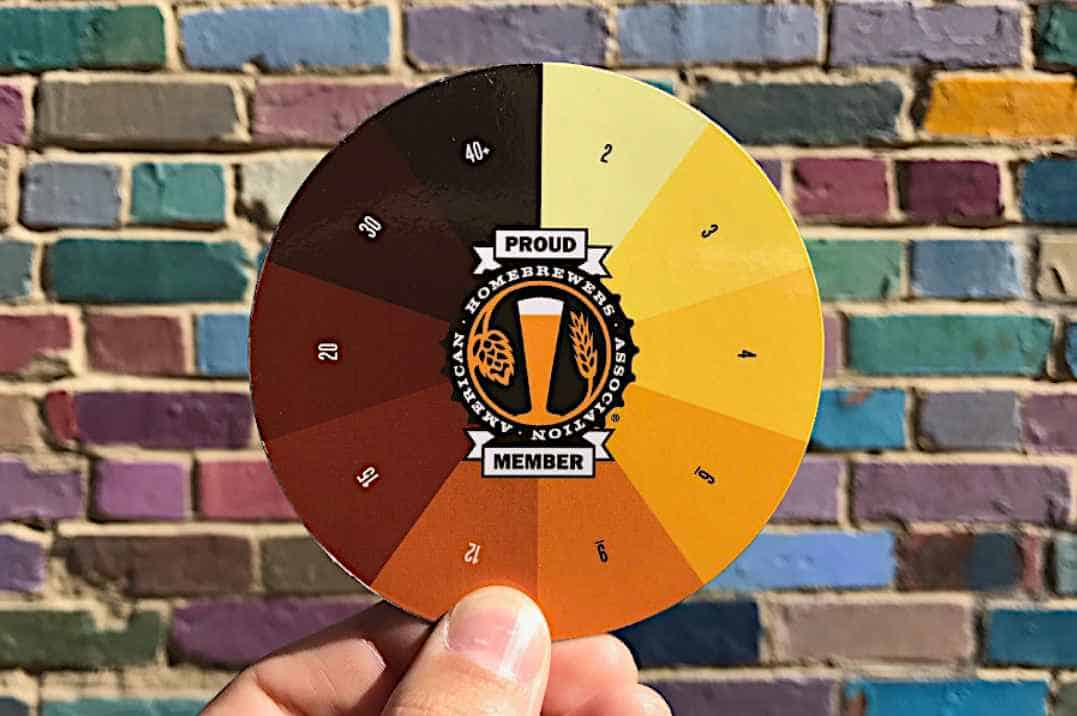 SRM stands for Standard Reference Method, a scientific way to measure a light’s wavelength. That is, after it crosses a particular beer. However, simply put, SRM is a beer color system. In other words, it is a scale to measure beer color.

This scale is still new to the scene, having been found in the 1950s by the American Society of Brewing. In addition, as you will see later, there is more than one color scale for beers. However, the SRM is, as its name suggests, the standard today.

SRM VS Other Color Scales

SRM is not the only color scale in the brewing scene.

To better understand the Standard Reference Method, let us briefly look at some of the other color scales in the brewing scene and compare them with the SRM.

The SRM Method VS the Lovibond Scale 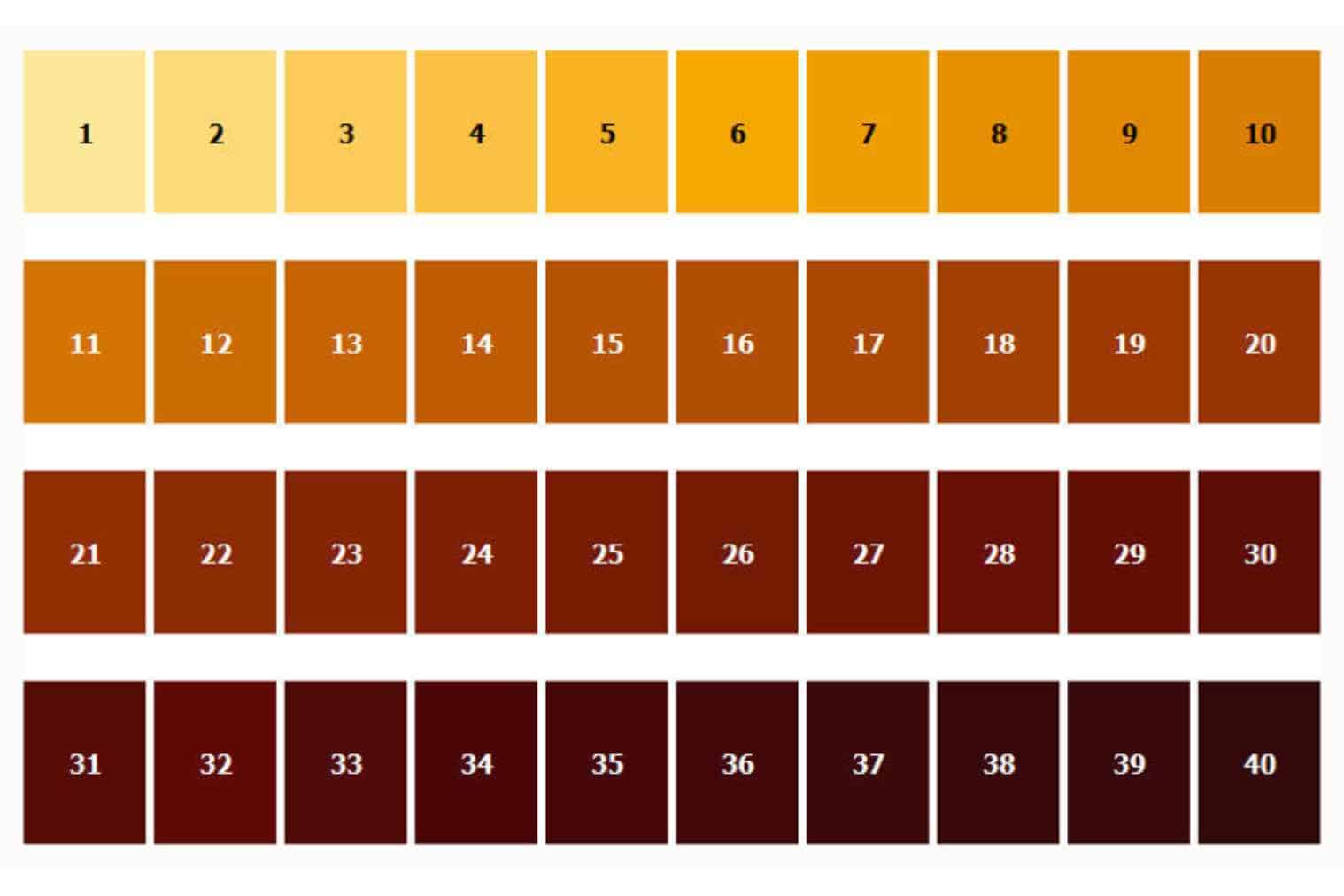 Before the SRM method entered the brewing scene, there was the Lovibond scale.

To put it simply, Lovibond is more of a comparison method, while SRM is a measuring process. Let us expound on that, though.

The Lovibond is a scale developed by Joseph Lovibond. It came to the scene almost a century earlier than the SRM method, as it entered the beer scene in 1885. However, as you might know already, it is no longer the most favored color scale today.

This scale simply required comparing a beer sample to a reference. As you can imagine, it was a pretty subjective scale. In addition, it was one prone to human error. Hence, the shift to the SRM method.

Despite all that, it might be the best time to note that this scale is still in use. Only now, it works hand-in-hand with the SRM method.

The SRM Method VS the MCU Calculation

MCU stands for Malt Color Units. It is an equation that helps determine what color a brew would be. It is similar to the SRM, but its estimate becomes less accurate with darker shades. That is when compared to the SRM. However, like with the Lovibond scale, the MCU equation is still in use. Usually, with the SRM.

We will show you the MCU equation when we show you how to compute the SRM. However, let us discuss the EBC first.

The SRM Method VS The EBC Process 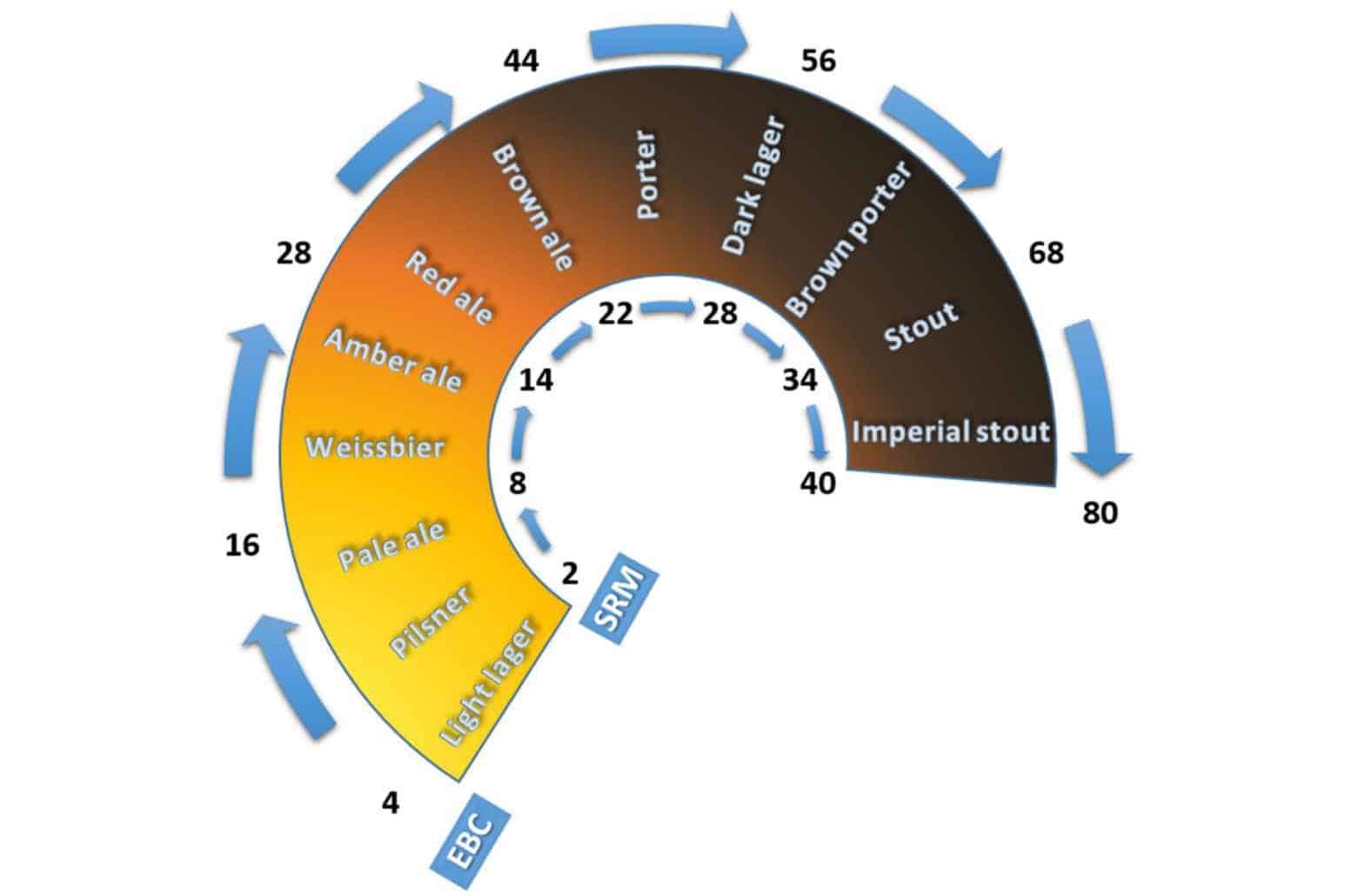 Finally, we come to our last color scale example.

The EBC stands for European Brewing Convention. This one is similar to the SRM in almost every way. One can say the EBC is the European SRM. The two scales have similar processes enough for a brewer to convert one to the other.

If you are interested to try it for yourself, here is the equation to get the EBC from the SRM:

On the other hand, if you have the EBC and want to get the SRM, you can use this equation instead:

Should I Use SRM, Lovibond, MCU, or EBC?

After getting to know the different color systems, a question might have come to your mind: “Which one should I use?”

Well, as we have already said, SRM is now the standard. However, that does not mean we should put the others aside. As you will see in the following section, it would be best to know and use them all.

How to Compute SRM? 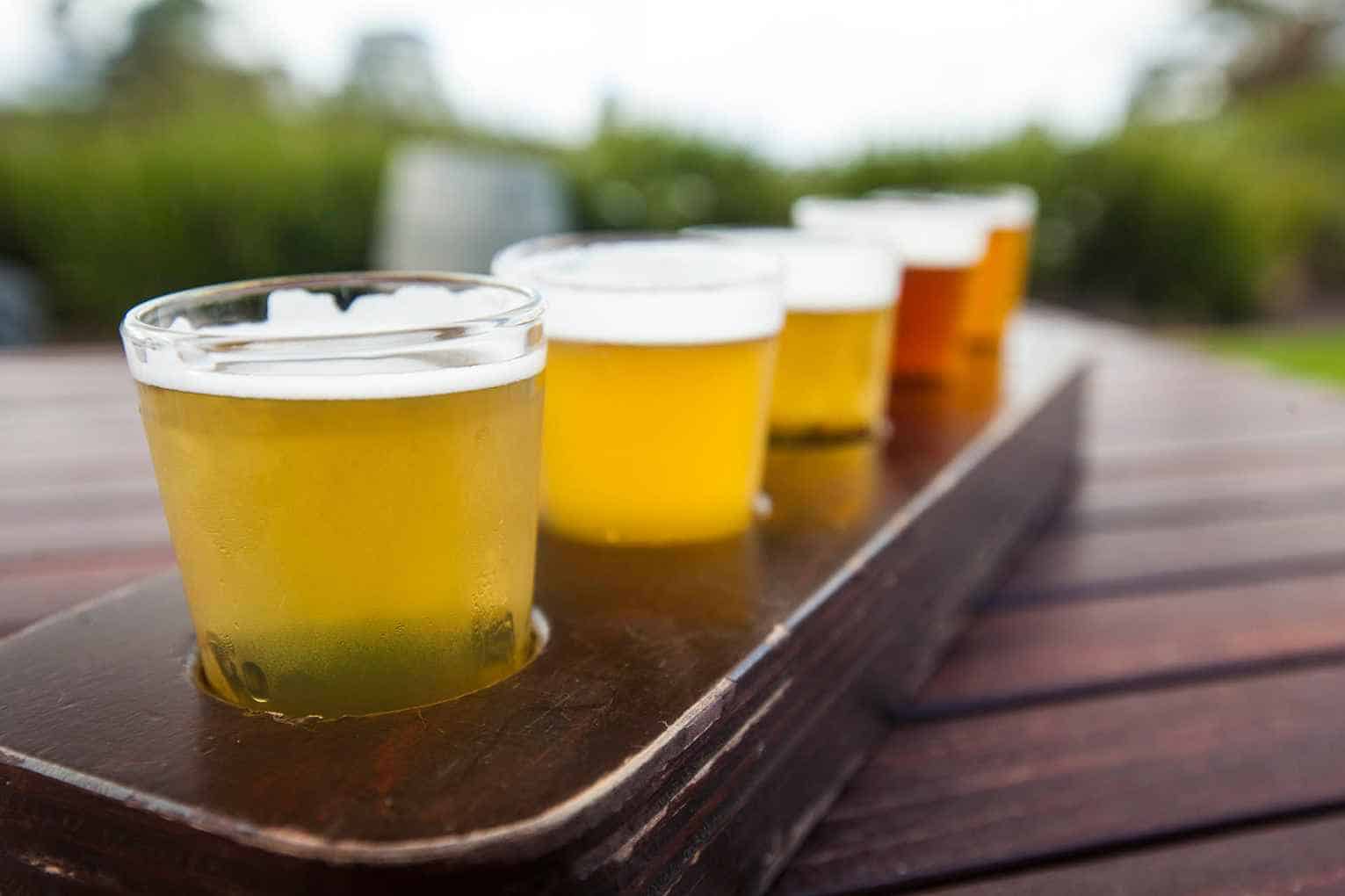 With all that, you now likely understand the process behind the SRM scale better. Now, let us see how it is of use in practice. Let us look at how to compute the SRM.

As we have said above, the MCU equation works with the SRM. To compute the latter, we need to get the MCU first. To do that, we use this equation:

(Note: Again, as we have said above, the Lovibond scale also works with the SRM. As you can see from the MCU equation, we need this scale to get the SRM.)

Once we get the MCU, we can start computing the SRM. To do that, we only need to use this formula:

Easy peasy! Do you not agree?

Getting to Know the SRM Color Chart

Since we are talking about colors, one of the best ways to get our thoughts across would likely be through visuals. With that, let us show you a sample SRM color chart.

A note of caution. We do not claim to have the perfect shades. We did try. However, with pixels, resolutions, and all that jazz, the colors could get distorted from one screen to another.

You can use this chart as a reference to tell what SRM value a particular beer has. However, remember that the SRM values and the corresponding colors here are only to give you an idea and are not 100% accurate. 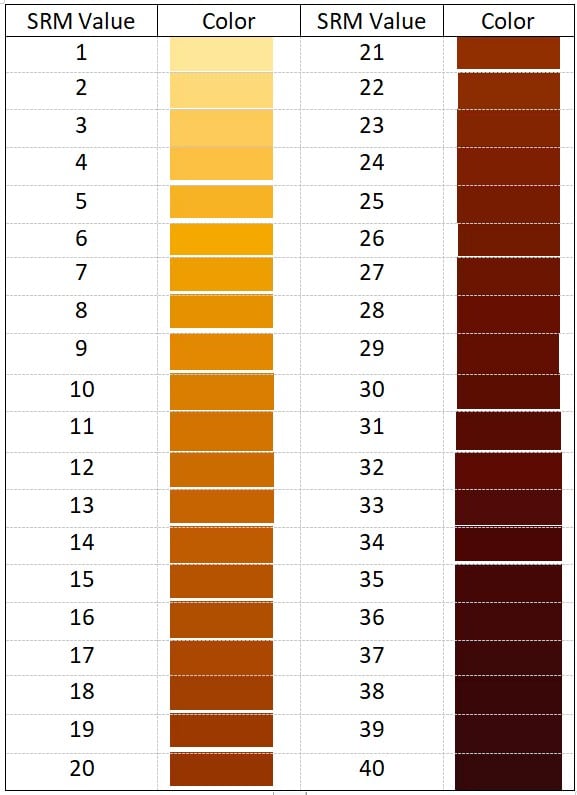 As you might have noticed, the SRM color range is only 1-40. There are more. It can even reach up to 80. However, the chart ended at 40, as it could be hard to perceive the darkness of the hue after 40. After 40, you can take it as the brew only gets darker and darker.

To better understand the SRM colors and values, let us put a “face” to them. Here are some beer styles and their corresponding values:

So far, we have discussed beer colors and how to measure them. Now, let us briefly discuss how these beer colors get from one color to another.

In the same way that every item added in the making of a brew affects its flavor, each ingredient also affects the beer’s color. However, some things in the process considerably affect a beer’s colors. Those are:

These are only examples, though. Again, every item added to the brew can affect its color. In addition, the execution of every step and process will also have an effect on the beer’s color.

Finally, after all that, let us briefly discuss what all that meant. We now know about different beer colors, how to measure them, and even what causes them. However, what does it all mean to a casual beer drinker?

We cannot explain the meaning of each SRM value here. After all, color alone does not dictate the entirety of a beer. However, one way to make sense of the different colors is that lighter-colored beers tend to be delicate and refreshing. On the other hand, darker-colored beers tend to be heavy and complex. Keep in mind that this is only a general look, though. A light-colored beer could surprise you with its flavors and aromas. On the other hand, a dark-colored beer could surprise you with how delicate it is.

(Note: Talking about light VS dark beers is not synonymous to talks of ales VS lagers. While ales tend to be dark, there are light varieties of it. On the other hand, while lagers tend to be light, there are dark types of it.)

And that concludes our beer color guide! It is no secret that beers come in varying hues and shades. However, it is not always clear what the lovely and mesmerizing tinges and tones hold.

Today, we uncovered what the different colors mean. However, that is not the only secret these alcoholic drinks hold! To get to know these drinks better, you can visit our other beer talks!