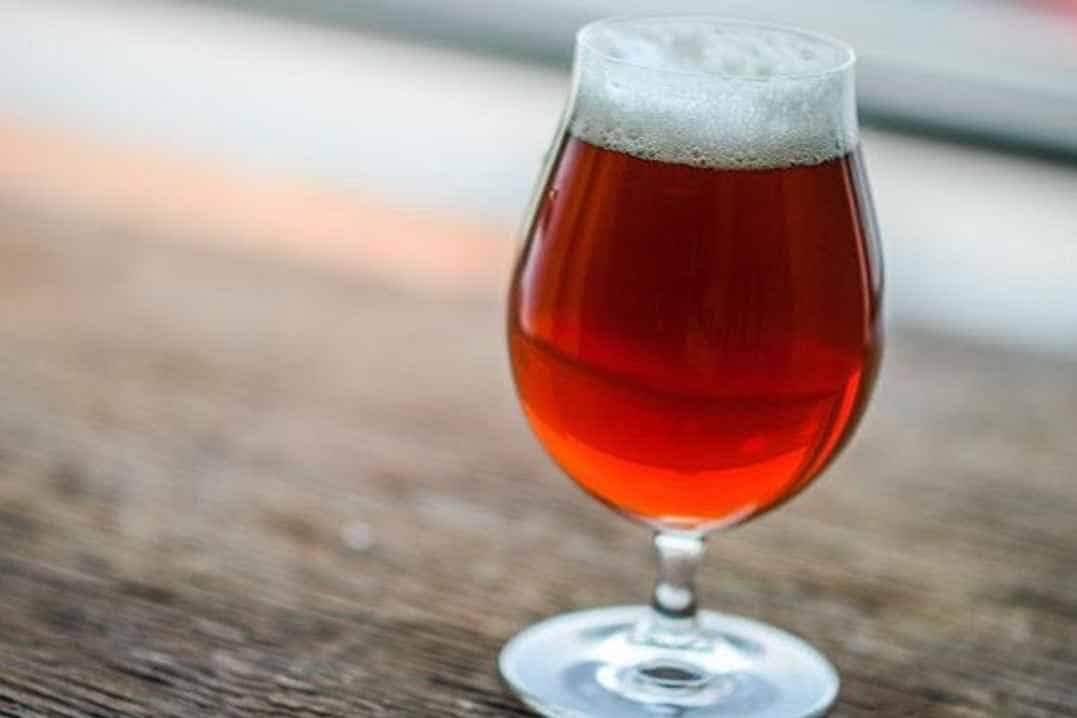 Beers exist in a wide range of colors and flavors. One example is the vibrant amber beer. So, what is amber beer? It’s an American term that refers to beers that go from golden red to crimson. Aside from its exciting colors, amber beer has a distinct, unforgettable taste. Read on to learn more about this unique beverage.

What is Amber Beer?

Amber beer or amber ale is a medium-bodied and slow-fermenting beer. It features a deep or golden color. According to the US Association of Brewers, hops are primarily responsible for their flavor.

An Overview of Amber Beer 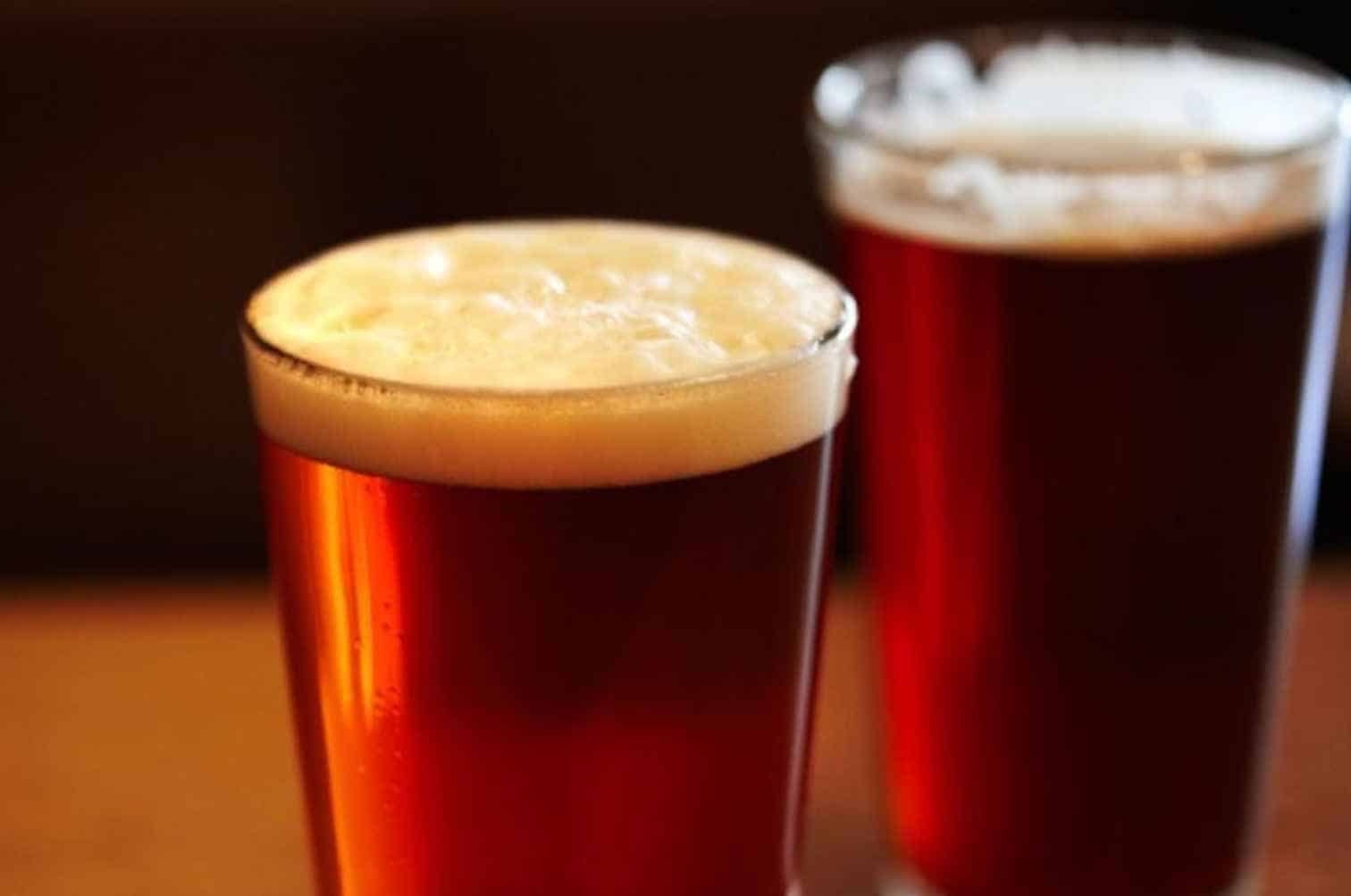 Amber beer is perfect for people who love pale ale but want to try a maltier beverage. This medium-bodied drink has caramel-tasting notes. However, some brewers add toffee undertones for a richer flavor. You will also notice hits of fruitiness due to its yeast content.

Amber beers offer a low to moderate “hoppy” aroma. This distinct scent comes from dry hopping or adding American hop late in the brewing process. Some brands emit an aroma of citrus and hop. The medium to high maltiness sometimes overpowers the scent of hops, bringing a whiff of caramel. Drinkers perceive some fruity esters in some brands while others don’t have any.

Amber beer tasters will experience light to medium weight and carbonation. Generally, red beers have smoother textures than others. The finish usually exudes a complex maltiness.

Most of the time, amber beer leans towards the hoppy side. It could be extra hoppy if brewers added the hops during brewing. Generally, amber ales are noticeably bitter except for sour styles.

Amber beer contains medium to dark roasted crystal malt. This ingredient is responsible for the caramel and malty flavors of the beer. Brewers use American-variety hops to produce American amber ale. This element provides citrus, fruity, and piney notes that balance the beer’s maltiness.

What is the Origin of Amber Beer? 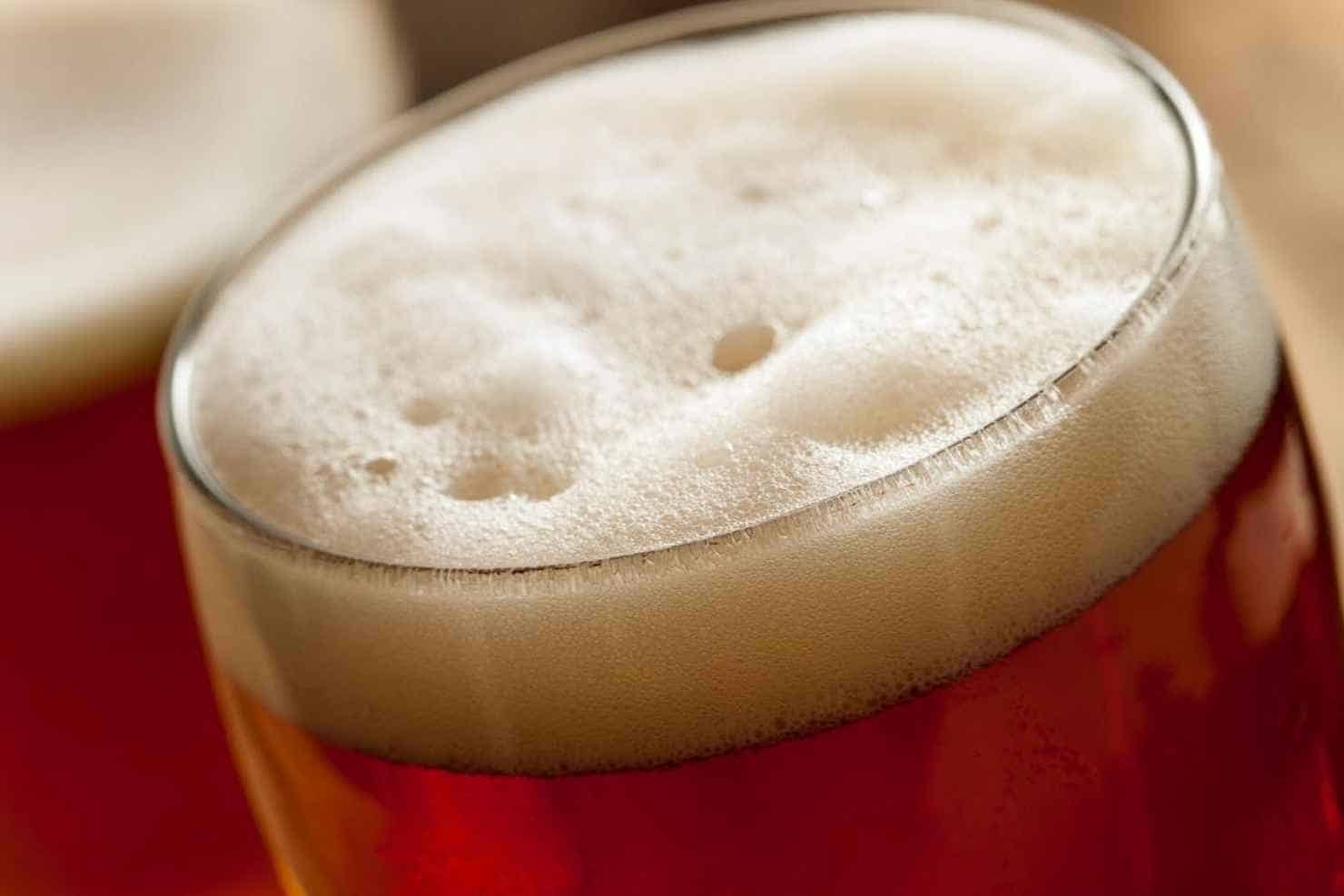 The amber beer recipe originated in California and the Pacific Northwest in the 1980s. Brewers from these areas were the first ones to make this beer style. It became widely popular in the US and has spawned several names and versions in other states.

The American Pale ale was the inspiration for the amber beer. They share the same high levels of “hoppiness”, aromas, and flavors due to the use of American variety hops.

Some beer enthusiasts in Oregon, Washington, and California refer to amber beer as West Coast Ale. On the other hand, some people refer to this golden-red beverage as American Amber Ale or simply Red Ale. If you are ordering amber beer in Britain, remember to say Brown Ale to the bartender. The British coined this term to distinguish it from Dark Porters, Dark Stouts, and Pale Ales.

Marketers have come up with the following names to make it stand out from other beer styles: 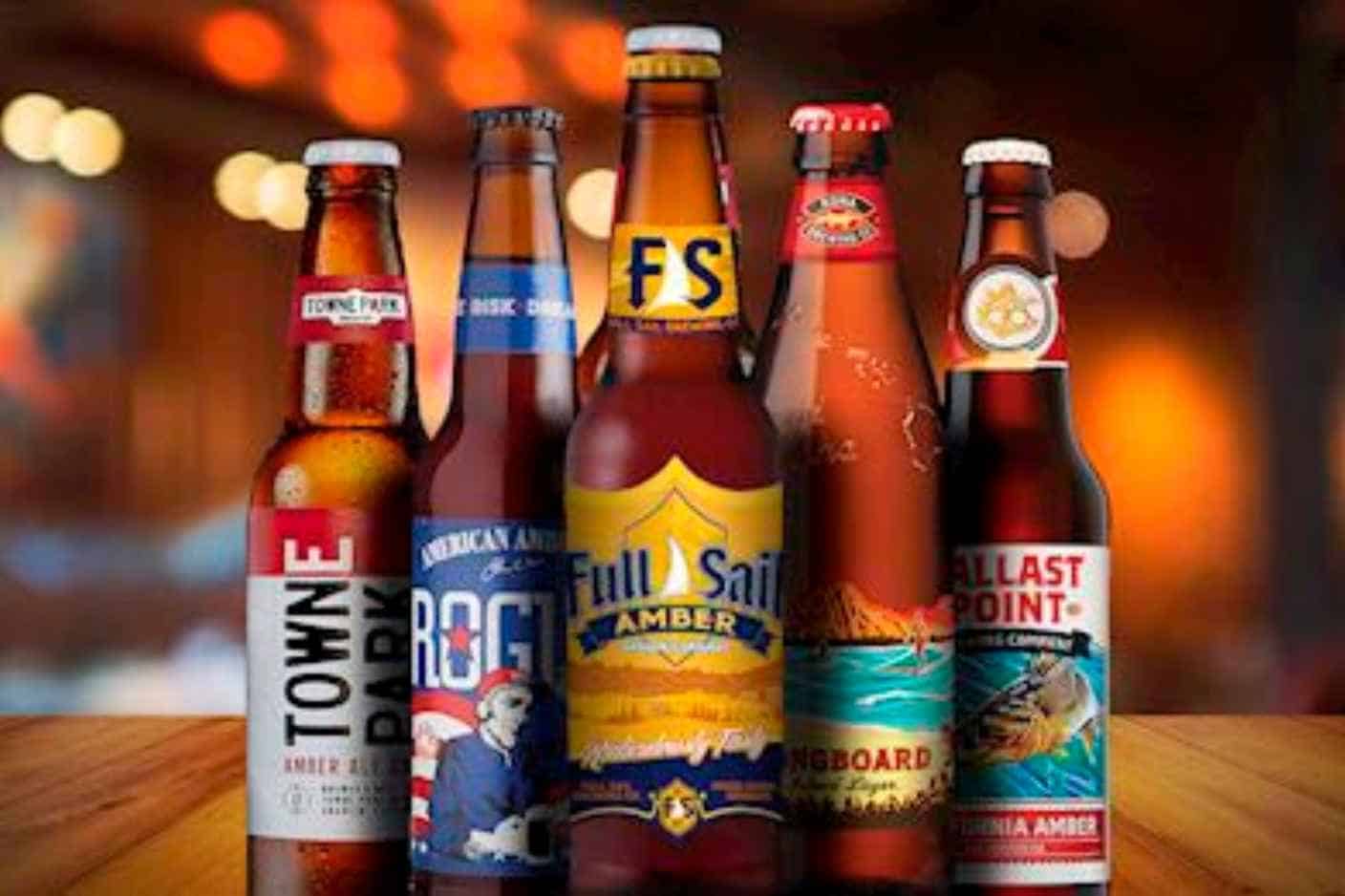 Amber beer may have originated from the US, but you can now find different versions worldwide. Each country created amber ales with varying alcohol content, flavors, and shades of red. Several European and Australian breweries tailored their concoctions to local preferences.

The following are the amber ales from different parts of the globe:

The Fat Tire Amber Ale is among the most popular in the states. It’s a creation inspired by American bikers touring some parts of Europe. Brewers of this beer type use only European hops and grains. However, it’s produced using the American technique.

If you’re drinking in Australia, don’t be surprised by the unusual names they give their beers. Popular brands include the Endeavor Vintage Reserve of the Mountain Goat Fancy Pants.

Germany is home to excellent beer, so you’ll find some amber ale brands there. You can try the Smoked Amber Beer or, as Germans call it, Rauchbier. There also have the Bavarian Amber Rye Beer and the Cellared German Beer or Kellerbier.

What is the Difference Between Amber Beer and Other Beers?

There are times when people confuse amber beer with other types of beer. It’s not surprising since it shares similar characteristics with different beer types.

The opposite names of these two beers give away their main difference. The amber beer’s color is darker than the pale ale’s hue. Brewers also use different malt types for each beer. It results in amber beer being more malt-forward than pale beer.

Another glaring difference lies in their finish. Amber beers have a smoother sensation in the mouth. In contrast, pale ale has a drier finish due to its higher hop content.

Although both beers are known for being malt-forward, amber beer’s malt and hop flavors are more balanced. Amber and brown ales also have notes of toffee and caramel.

These two crimson beers are often interchanged due to an overlap in their features. However, there are several distinct variations. Amber beer is traditionally reddish brown.

On the other hand, red ale gives off a deeper red color, like ruby or copper. Additionally, amber beers are sweeter and maltier than their red counterpart. Amber beers have lower roasted malt content, making red ales taste roasty.

The pair that is miles apart from each other is amber beer and lager. These beer types have very different taste ad flavor due to their varied brewing processes. Brewers make Lager beers using bottom-fermenting yeast. 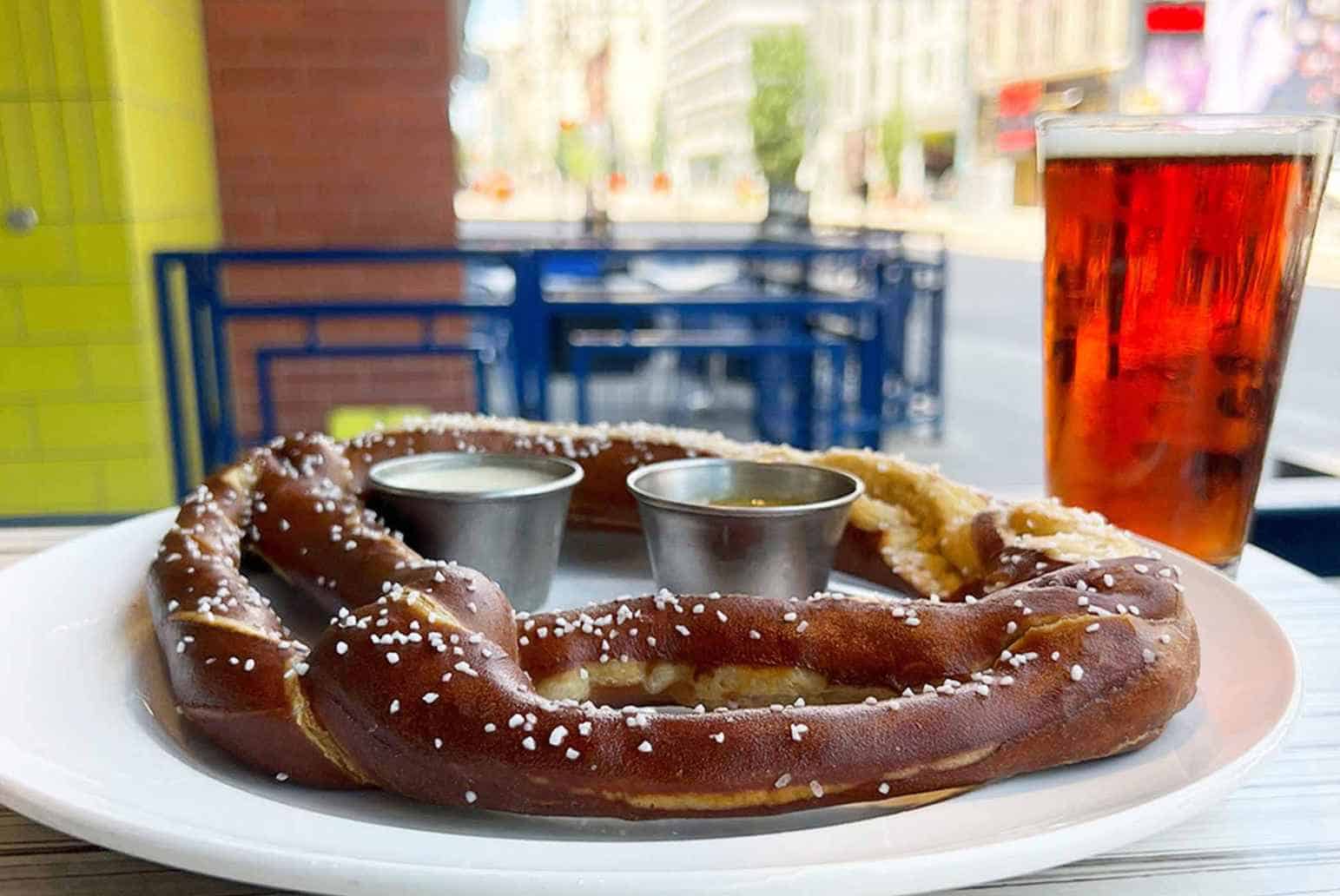 Amber beer has its share of nuances and exciting facts. So, we gathered some frequently asked questions about this golden-red beverage.

What food is best paired with Amber beer?

Its versatility makes it an excellent companion to crowd favorites such as pizza, stews, and chicken. Aside from these savory dishes, amber beer is also a perfect match with desserts such as cheesecakes and chocolate.

How do you serve amber beer?

Most of the time, bartenders serve amber beers in chalice or tulip glasses. However, beer mugs or stein glasses are also great options. These glasses feature a bottom that’s wider than its top. The design allows optimal retention of flavors and body.

Do you need to chill amber beer?

Serving amber beers chilled to about 38 to 55 degrees Fahrenheit is best. This temperature range enhances the beer’s malty and hoppy flavors. It’s also acceptable to serve them at room temperature.

How many calories does amber beer have?

Can you cook with amber beer?

Yes, you can cook with amber beer. You can add some to meat pies and casseroles. It’s also an excellent tip to pour some on raw steaks before cooking. The beer’s flavors make the meat tastier.

What are some excellent amber beers?

There are several amber beers in the market. But the following are the best ones you can try:

The next time someone asks, “what is amber beer?” you can share valuable information. Learning about this unique beer allows you to appreciate its complex flavors and mesmerizing appearance fully.

It is nice to know that Amber beer pairs well with many familiar comfort foods like barbecue and pizza. It’s an excellent addition to parties or intimate dinners with loved ones. Remember to serve it chilled and use appropriate glasses for optimal enjoyment.